Viral Video Of Parked Motorcycle Moving On Its Own Intrigues Netizens

"Nobody would have believed this if it hadn't been captured on camera," wrote one Twitter user while sharing the footage. 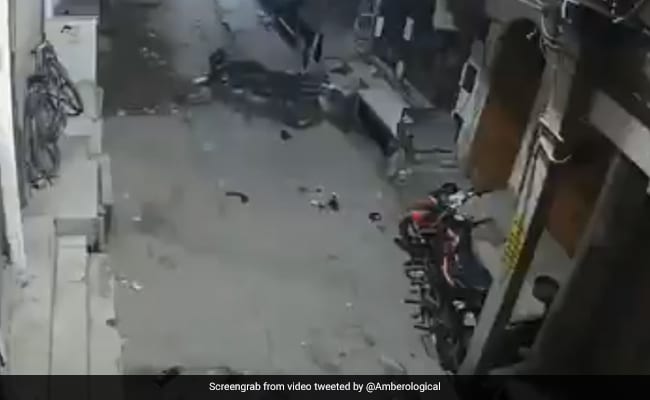 A motorcycle was seen moving apparently on its own in this CCTV footage.

Paranormal activity or just some clever editing - that is the question Twitter users are asking after footage of a parked motorcycle apparently moving on its own began to go viral on the microblogging platform. The CCTV footage surfaced on Twitter only last week, although it was filmed in December last year. Since then, it has left thousands of viewers intrigued and spooked in equal parts - although many have claimed that the clip is nothing more than an example of some nifty video editing or that the bike moved because of faulty wiring issues.

In the 30-second footage, two motorcycles are seen parked on the side of a road. Suddenly, one of the bikes begins moving on its own, turning left and reaching the middle of the road before falling down.

"Nobody would have believed this if it hadn't been captured on camera," wrote one Twitter user while sharing the footage.

The CCTV footage has been viewed over 18,000 times on the microblogging platform.

Another version of the video, posted last Monday, has also received nearly 38,000 views.

The strange incident has divided opinion on social media - with many claiming that the footage has captured paranormal activity and others countering it with more rational arguments.

Accidently bike started due to faulty electrical wiring and start moving because bike was in gear.People now telling that this is miracle or ghost case
All bakwaas

Edited video, it's not possible.
Ghost is not available on earth, if so then it would be not easy to survive on earth.
Sorry but its fake

There is nothing super natural of ghosty about this action of this bike.

1. Faulty wiring leading to engine to crank while bike is in gear
2. Poor installation of remote locking, leading to cranking when start button is pressed.

Many Twitter users also raised doubts about the authenticity of the video, wondering if the footage was real or edited.