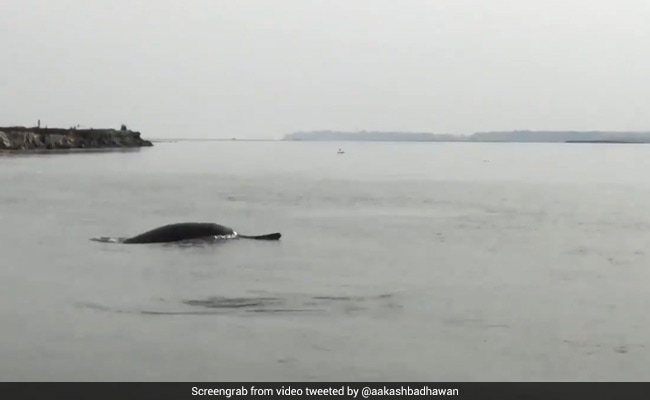 A video that is being widely circulated on social media shows the elusive Ganges river dolphin swimming near Meerut in Uttar Pradesh. The Ganges river dolphin is a freshwater dolphin found primarily in the Ganges and Brahmaputra rivers and their tributaries in India, Bangladesh and Nepal. The dolphin, recognised as India's national aquatic animal, is now considered an endangered species, making the sighting all the more special for wildlife lovers on social media.

The undated video was shared this morning on Twitter by Indian Forest Services officer Akash Deep Badhawan, who said that he was "fortunate" to spot the dolphins in the Ganges river near Meerut.

"Ganges River Dolphin, our National Aquatic Animal once lived in the Ganga-Brahmaputra-Meghna river system is now endangered," wrote Mr Badhawan while sharing the video. "They live in fresh water and are practically blind, with small slits as eyes. Was fortunate to spot these in Ganges in Meerut."

DYK?
Ganges River Dolphin, our National Aquatic Animal once lived in the Ganga-Brahmaputra-Meghna river system is now endangered. They live in fresh water and are practically blind, with small slits as eyes.
Was fortunate to spot these in Ganges in Meerut. pic.twitter.com/BKMj8LqaIi

The video has already collected over 10,000 views since being shared online this morning. It has also collected several amazed comments, including some from people recounting their own sightings of Ganges river dolphins.

Till early seventies one could.find them in Hindon, Ghaziabad.
Called Soons here as well.

In the comments section, Mr Badhawan explained that the freshwater dolphin is found largely in tracts of the Ganges where fish is abundant and water currents are slow.

According to a 2015 news report, often known as the 'Tiger of the Ganges', the river dolphin is an indicator animal, which has the same position in a river ecosystem as a tiger in a forest. Direct killing, habitat fragmentation due to construction of dams and barrages, indiscriminate fishing and pollution of rivers are some of the major threats affecting the species.