2 million views for this video. 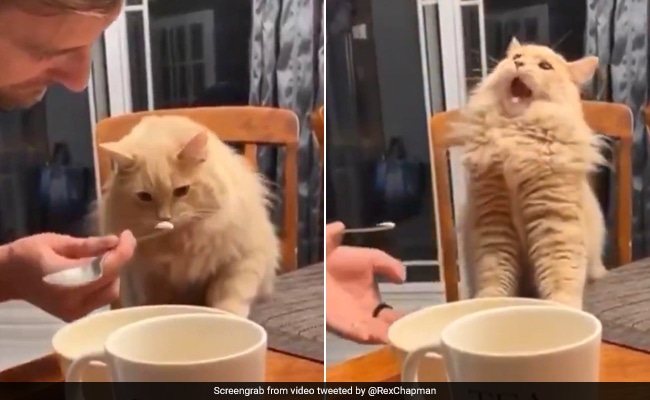 A fluffy white cat sniffs tentatively at a small spoonful of ice cream. She looks doubtful, but deigns to taste the treat being offered. Then, her eyes widen and her mouth falls open in horror. She shakes her head from side to side - as if not daring to believe the taste of the ice cream she just ate - before sinking down dramatically on a chair.

While the scene is funny to watch and the act of feeding ice cream to a cat innocent enough to the casual viewer, it has led to a heated debate the microblogging platform. Many were left in splits after watching the cat's dramatic expressions, but others have termed it animal cruelty.

The video is not exactly new, and neither is the trend of feeding ice creams to cats. According to Fox News, this clip had emerged online last month and received massive backlash then as well from viewers who accused the cat's owner of intentionally giving it a brain freeze.

Since being re-posted on Twitter by retired basketball player Rex Chapman, the video has collected over 2 million views and divided opinions on the microblogging platform once again.

Hundreds of social media users flooded the video with comments about animal cruelty - and each claim of animal abuse was hotly contested by others of the opinion that feeding ice cream to cats is essentially harmless. Take a look at some of the reactions the video has garnered:

This is animal cruelty. Shame on you and anyone that thinks this is funny.

I don't know the medical explanation for that, but it's definitely NOT a cat enjoying ice cream. I feel really bad for the kitty ????

Lol, drama queen cat. Our cats will rip through anything just to lick the ice cream container

Looks like a typical cat moment to me - no abuse.

According to the Washington Post, expert opinions differ on whether or not it is healthy to give ice cream to cats.

Veterinarian Amy Cousino is not a fan of people intentionally giving cats a brain freeze. "It's pretty unhealthy for the cat," she said. "Cats have very similar nervous pathways [to humans]."

Eric Doughtery, veterinarian and medical director for The Cat Practice in New York, however, is not fully convinced about the adverse effects. "There hasn't been much research on feline brain freeze," he told the Washington Post, adding: "I can't imagine that [brain freeze] would be different in cats."