The video was shared three days ago and has amassed over four million views and 3.5 million likes. 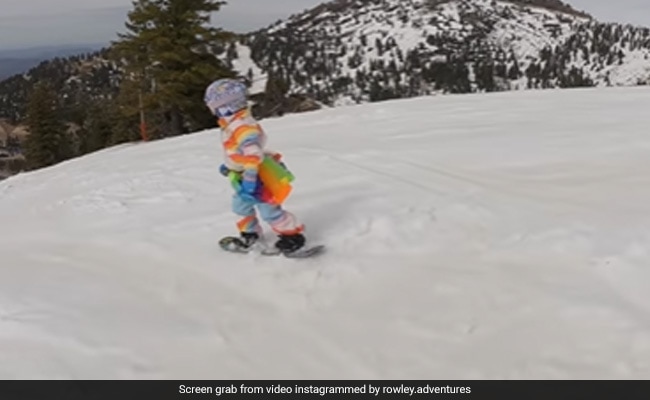 The video is too adorable to be missed.

Who doesn't like watching videos of children having fun? In one such video doing rounds on the internet, a little girl is seen enjoying herself while snowboarding effortlessly, even though the sport can be very physically demanding.

In a video shared by internet user Rowley Adventures on Instagram, the toddler, dressed in a rainbow and unicorn outfit, is seen singing the "number song" enthusiastically while her parents record her. She starts, " 1 2 buckle my shoe, 3 4 shut the door" and continues with the song. As she reaches the number nine and ten, she realises she has picked up too much speed on the snowboard and exclaims "Too much speed, aaah!" and then falls on the snow. The video is too adorable to be missed.

The video was shared three days ago and has amassed over four million views and 3.5 million likes. The caption mentioned how the video became viral across networks. The user also added, "We learned from the first time we posted this is that there are many different versions of this song. Also, her rainbow outerwear is not any form of statement, she's 5, she loves rainbows and unicorn's. Heck so do we! What we'd give to ride a unicorn on a rainbow"

One user said, "Favorite part is he singing out "so much speed" and then following up seconds later with "too much speed"

"Let those rainbows and unicorns be exactly what they are. Colors and fantasy," said another user.

"this is one of the best videos in existence I mean I couldn't love something more than I love this. Soooo much love to you guys and she's so amazing and gifted," addec another person.

A fourth person commented, "When she wins her first Olympic Gold they can play this video after the award ceremony."