Viral Video: Dog Jumps In Excitement After Seeing Its Meal, Internet In Splits

The video was shared on Twitter by user Buitengebieden on Twitter on November 27 and since then has amassed three million views and over a lakh likes. 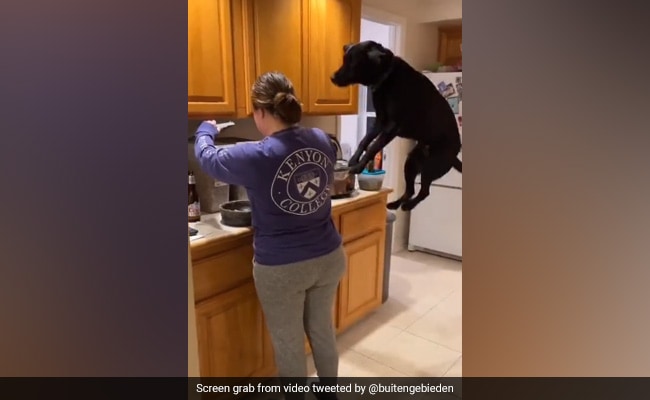 The dog, who is jumping, doesn't stop even for a bit.

Dogs are fun creatures. They can brighten up anyone's gloomy day with their sweet gestures. Whether it's their delicious meals or a tasty snack throughout the day, dogs get very excited about food. At the first hint of food, they bark, jump, lick their lips, and wag their tails.

In a similar incident, a dog was seen jumping excitedly as a woman was seen pouring his food in a dog plate. It gets funnier because the dog keeps on jumping, which makes the woman smile. A few seconds later another dog arrives and sits patiently for food. The person recording the video shows the stark contrast between the two dogs. The dog, who is jumping, doesn't stop even for a bit.

The video was shared on Twitter by user Buitengebieden on Twitter on November 27 and since then has amassed three million views and over a lakh likes.

One user commented, "My dogs are so spoiled they don't get excited at all over dry food. They literally look at me then look at their bowl and look back at me completely insulted then walk away."

"My mood when pay day is here," said another user.

"Look at the excitement. Lol Such a cutie," said a third person.

"I love when dogs do that. The thing is: when my dog does that to get something, I always take more time to give her, because I love seeing her jumping this way," commented someone else.