The video of the friendship between a dog and a monkey will surely set you in a weekend mood. The partners in crime are seen near a shop. 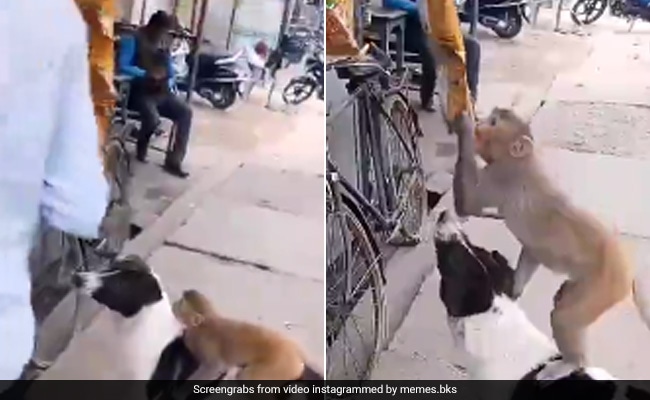 Dog Helps Monkey To Steal A Packet Of Chips From Shop

The video of the friendship between a dog and a monkey will surely set you in a weekend mood. The partners in crime are seen near a shop, with the monkey - the notorious and curious animal - stealing a pack of chips.

The 🐒 trying to pick up a packet of chips with the help of 🐕 is the cutest thing you will watch today ❣️❣️. #goodmorning#dog#dogs#monkey#monkeys#animal#AnimalLovers#cute#lovable#adorable#friendship#bond#teampic.twitter.com/bkMAEU13NC

The video is old, originally posted in December last year, but is going viral again. It shows the monkey stealing a packet of chips from a shop by standing on the dog's back. It has been shared by Memes.bks on Instagram with the caption: “Who say monkey and dog are not good friends.”

The video amused viewers, who reacted with hilarious comments about their own friendships.

“After seeing this i remember my friend,” a user commented. “Teamworks,” a second user wrote.

Some of the user comments, like “Parallel universe” took it to another level.

Although it has been said since ancient times that monkeys and dogs cannot be friends, a few videos on social media have proved them wrong.

A video of a wild monkey riding its favourite dog everywhere went viral on social media two years ago.

The video was shared by The Dodo on YouTube and garnered more than 10 lakh views and over 17,000 likes.