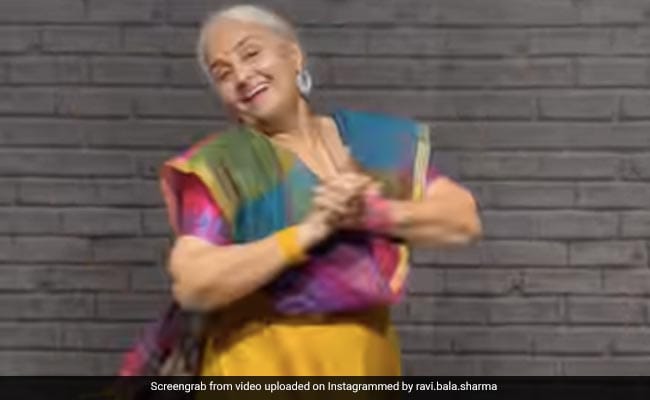 If you are on social media, then you may have come across 63-year-old Ravi Bala Sharma's dancing videos. Age is just a number for Ms Sharma and she doesn't let it define her. This time, she has taken to her Instagram page to share a video of herself dancing to Ranbir Kapoor and Alia Bhatt's superhit number Kesariya from the movie Brahmastra.

The content creator has gained massive popularity on social media and she often posts videos of herself dancing to Bollywood numbers. Dressed in a yellow skirt, pink blouse and a dupatta, Ms Sharma looks beautiful while grooving to the popular track.

The video has gone viral and so far has garnered over 1,80,000 views and 15,713 likes. The internet was quick to show love and shower her with praise. Painter Manjri Varde wrote, "Unforgettable," another wrote, "This combo, Arijit's voice and you made my day I think barely someone had seen a person more cuter than u." The third user wrote, "So elegant and beautiful You are such a big inspiration ma'am."

Talking about the love and appreciation she has received on social media, Ms Sharma told NDTV in an old interview, "I had never imagined that something like this will happen and my dream will come true at this age. I just posted my videos and everyone liked them."

She hopes that her story will inspire others to pursue their passions, irrespective of age.

"If you are aged don't think this is it, and that you can't do anything," she advises.