In the video, the girl sports a white t-shirt, blue jeans, and a red shrug similar to the one the actress wore for the song. 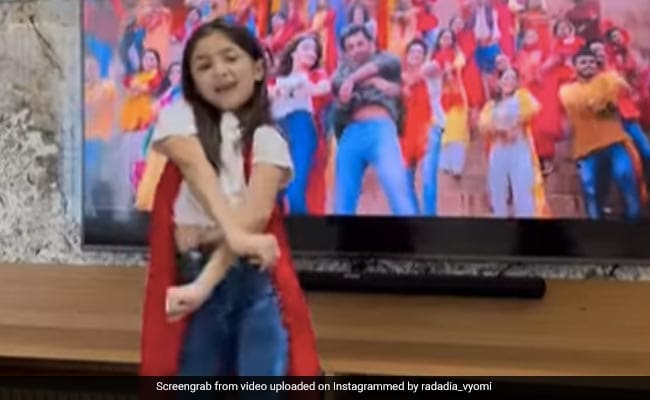 It's been months, but Ranbir Kapoor and Alia Bhatt's love anthem, 'Kesariya', from the movie 'Brahmastra' is still ruling the charts. Social media is full of videos of people recreating the song's dance steps. Now, a video of a little girl grooving to the song and perfectly imitating Alia Bhatt's dance moves has gone viral.

The clip has been shared on the Instagram handle @radadia_vyomi, which has over 75,300 followers. "Weekend fun," reads the caption of the post alongside a grinning face with star eyes emoji.

In the video, the girl sports a white t-shirt, blue jeans, and a red shrug similar to the one the actress wore for the song and dances to the song playing on an LCD television in the background, without missing a beat. Her energetic moves and perfect expressions are sure to make you smile.

The video shared on November 19, has amassed more than a whopping 99 lakhs views, 5.8 lakh likes, and a volley of comments, hailing her dance. Many called her 'cutie', while others showered appreciation in the form of love and heart emojis.

One user wrote, '' U better than original''. Another commented, '' She is so amazing, good job kiddo.'' A third said, '' Wow super amazing performance sweetheart,'' while a fourth called her ''Choti Alia.''

Dance videos are extremely popular on social media websites. Earlier, a video of a shepherd dancing to Govinda and Raveena Tandon's film 'Dulhe Raja' title track took the internet by storm. In the video, a man dressed in rugged clothes was seen showcasing his dance moves and unique style.