Over 2 million views for the video - and counting. 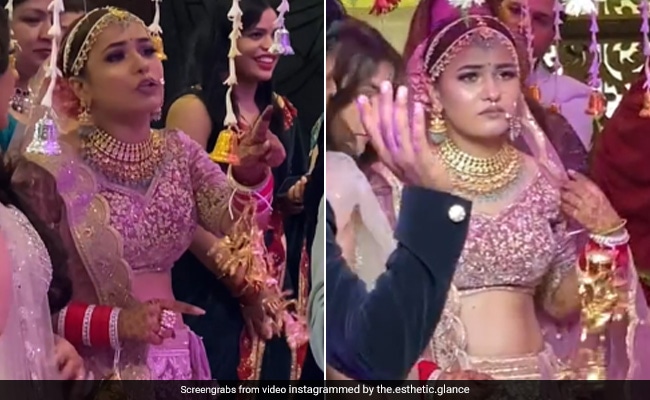 Shivani Pippel refused to enter the venue until her bridal entry song was played.

Can you blame a bride for being annoyed when her song of choice is not played as she makes her grand entry? That is the question which has divided Instagram users, thanks to a video going viral on the platform. On August 15, Shivani Pippel shared a video which shows her refusing to enter her wedding venue because the song she wanted to be played had not been put on.

"Vahi lagega. Usko bolo, maine bola tha (Tell him to put on that song. I told him)," the annoyed bride was heard saying as friends and family members tried to calm her down, telling her that the track would soon be changed.

The video has been viewed more than 2 million times on Instagram since it was shared by Shivani Pippel earlier this month. It has clocked in over 1.2 lakh 'likes' and more than a thousand comments on the photo and video sharing platform.

"My story too," wrote one Instagram user. "Same. Maine bhi yahi kiya tha (I did the same thing)," another said.

While many praised the video as adorable and said they could relate to the bride's irritation, a few also wondered whether the video was staged.

The clip has been re-posted by several Instagram handles over the last few days, contributing to its steadily-increasing popularity.

In the end, the bride did get the bridal entry she had dreamed of, set to the tunes of her favourite song. In a follow-up video, she revealed that the DJ played her song soon afterwards and she entered the wedding venue with a huge smile on her face. "Moment later [the] song was played," she wrote while sharing the video. Watch:

Last year, a bride in Kerala went viral on social media for ditching the conventional bridal entry walk in favour of a fun dance.