Viral Video: Baby Gorilla Jumps Around In Hay Until Mom Spoils The Fun

"Do watch the third jump and then the boss spoils the fun." 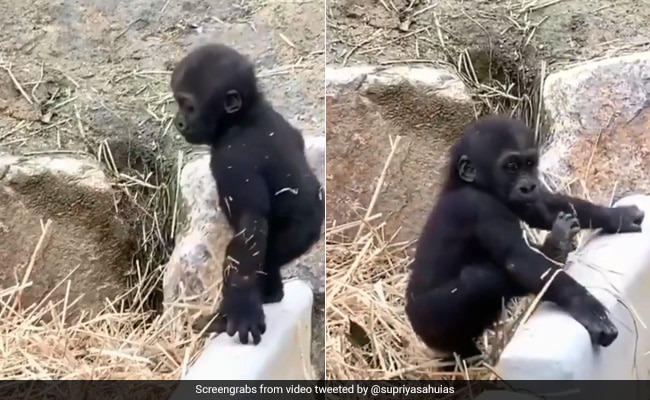 A video of a baby gorilla playing in a pile of hay has delighted many.

Many of us will remember our mothers putting an end to after-school fun and games so that homework could be completed and household chores finished in the evening. Perhaps that is why this video of a baby gorilla having a field day jumping around in hay until his mother spoils the fun is so hilariously relatable to several social media users.

The video in question was shared on Twitter by IAS officer Supriya Sahu on Monday. It shows a baby gorilla falling head-first into a pile of hay before getting up, climbing out and happily jumping in again and again. The little ape continues to do this until a bigger gorilla – probably his mother – comes up and carries him away.

"For the child in all of us," wrote Ms Sahu while sharing the video. "Do watch the third jump and then the boss spoils the fun."

Watch the video below, and don't miss the baby gorilla's adorable chest thump before his third jump into the hay:

The video has been viewed over 82,000 times since it was shared online. It has also garnered 6,000 'likes' and a ton of amused comments – many from people calling it a relatable scene.

Toddlers of both apes and homo sapiens act similarly at one point of the life-stage, it seems! 😁

That's something we all enjoyed in our Childhood 😄# It's never too late to get back on the track and stop destroying their Habitat #WildlifeConservationhttps://t.co/No36DgGHKF

Aren't our mothers the same . They will end up taking away from the nonsense we do . https://t.co/mVZqIYvEol

The baby gorilla video had earlier appeared online in February, when it had won Reddit users over. It had received over 6,000 upvotes on the platform, with hundreds of adoring comments.

"I love the little chest pound before the last jump," wrote one Reddit commenter, while another said: "I could watch the baby play all day! So cute!"

"This Is Not Niagara Falls": Stunning Video From Karnataka Goes Viral