Social media users lauded the determination and team spirit of the men. They called the group of men an "Anti-Gravity Gang". 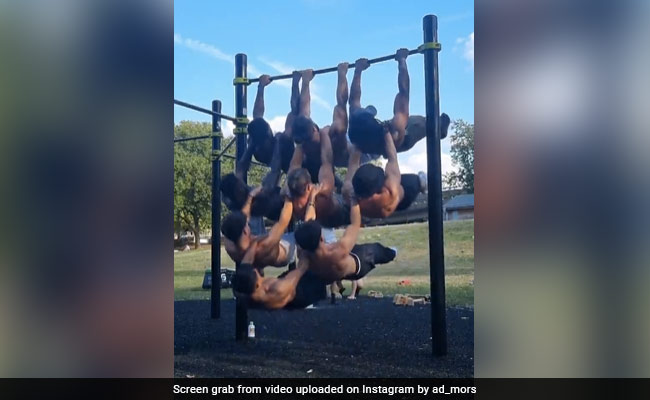 The Video has garnered more than six million likes and nearly 50 million views.

Fitness videos are quite popular on the internet and now a video showing nine men doing Calisthenics together is going viral on social media. The short clip was posted on Instagram by a user named Adam Morsel. "9 Man Front Lever Pyramid," he captioned the post.

The video opens to show nine men trying to form an inverted pyramid but failing to do so at their first few attempts. However, seconds later they are seen successfully forming a front-level pyramid and celebrating their brilliant feat.

Since being shared on August 28, the video has taken the internet by storm. It has garnered more than six million likes and nearly 50 million views. In the comment section, social media users lauded the determination and team spirit of the men.

One user wrote, "The fact that no one gave up! Y'all got it!" Another added, "Example of never give up."

A third commented, "That is absolutely the most gangster thing I've ever seen," while a fourth called the group of men an "Anti-Gravity Gang".

Meanwhile, speaking of mad fitness skills, a while back a video of a woman performing gymnastic tricks on a street lamp had left the internet stunned. The clip showed a woman climbing a lamp post like it is an everyday task. She used the end of the post as a pull-up bar and effortlessly performed 10 or more pull-ups.

After completing the stunt, she climbed down gracefully with a smile on her face. The video garnered over 900,000 views and thousands of likes on Twitter.