Viral: This Video Of Pandas Playing In Snow Is Pure Joy 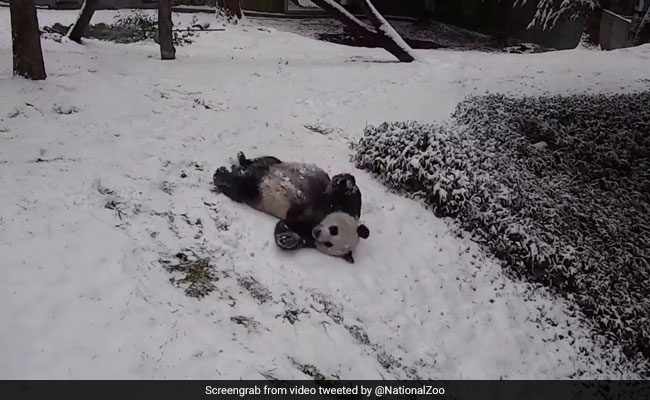 The pandas of National Zoo in Washington DC enjoy a snow day.

Feeling the mid-week blues? Look no further than this adorable video of two giant pandas playing in snow - it's sure to bring a smile to your face. On Monday, the Smithsonian National Zoo in Washington DC shared a cute video of two pandas taking full advantage of the weekend's snowfall in the area. Over the last two days, the video has gone massively viral on Twitter, racking up over 7 million views and 1.6 lakh 'likes'.

The 51-second clip shows giant pandas Mei Xiang and Tian Tian rolling around in the snow inside their enclosure. According to the Smithsonian Magazine, the zoo received about 2.5 inches of snowfall on Sunday evening, which translated into playtime for the pandas.

"Slides, somersaults and pure panda joy. Happy snow day from giant pandas Mei Xiang and Tian Tian!" wrote the National Zoo while sharing footage of the pandas on Twitter. Watch it below:

The footage has been viewed more than 7 million times on the microblogging platform, where people can't stop gushing over it.

"They're obviously drunks in bear suits..." another joked, while a third added, "Best thing on Twitter today."

I'm incredibly sorry, but... someone had to do it. Here's "Senator Bernie Pandars." pic.twitter.com/n0Wht7QU0e

Pandas live mainly in temperate forests high in the mountains of southwest China and survive on a diet of mostly bamboo. Native to cold environments, they are most active during the winter season.