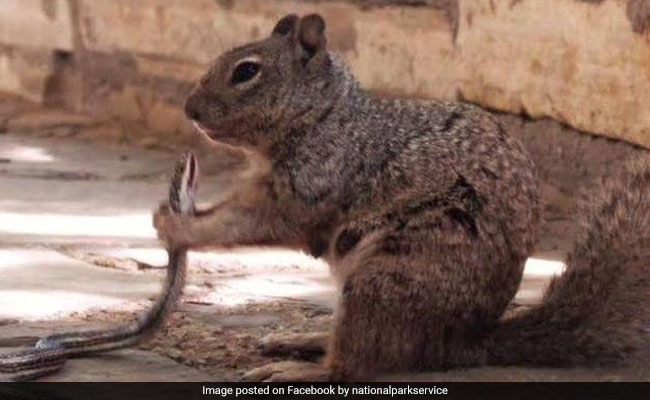 If you had to bet on the winner in a fight between a snake and a squirrel, you would probably pick the former. In this one instance though, you would have been wrong. A picture that has gone viral online shows a squirrel clutching a snake, reportedly before it devoured it "down to the last two inches." The role reversal has shocked the Internet, collecting hundreds of surprised comments.

The squirrel and snake picture was shared online by USA's National Park Service, who said that it was clicked at the Guadalupe Mountains National Park.

"Rock squirrels eat mostly plant material, fruits and nuts, but don't let their humble appearance fool you. They will also eat bird eggs, lizards and snakes," they wrote while sharing the photograph, adding that after the picture was clicked, the squirrel proceeded to devour "most of the snake, bones and all, down to the last two inches."

Since being shared online, the picture has collected over 7,000 reactions and more than 3,000 'shares'.

"Great. Now I am afraid of squirrels too," wrote one person in the comments section. "Squirrel eating snake, only in Texas," said another.

According to Huffington Post, the picture was clicked back in 2009 by park ranger William Leggett, and recently shared online again. He said that the squirrel was a nursing female, which is probably why she got "extra defensive" when she saw the snake.