Viral: Dog Filmed Having The Best Time In Water. His Owner? Not So Much

1.7 million views for this hilarious video - and counting. 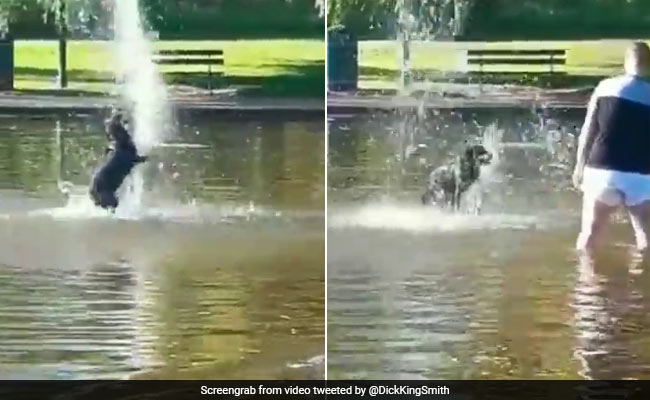 This dog was filmed having the time of his life in water.

A hilarious video that is going viral online shows a dog having the time of his life splashing around in water, even as his owner looked completely defeated by his mischief mongering. Twitter users are in stitches over the video, which shows the pet owner reluctantly wading through water to retrieve his dog, who was seen playing happily in a shallow pond.

The video, which appears to have been recorded in a park, caught the Internet's eye after it was tweeted by author Dick King-Smith. Originally posted to Imgur, it has now collected a whopping 1.7 million views on Twitter.

The 44-second clip begins by showing the man reluctantly lowering himself into the pond - his enthusiasm level quite in contrast to his dog's. As he wades barefooted through water, the camera pans to show his dog jumping excitedly near a water fountain placed inside the pond. Very clearly having a brilliant time, the dog was seen splashing his owner and drenching him from head to toe as he came closer in an attempt to retrieve his pet.

The difference in their enthusiasm levels has left viewers chuckling. Take a look at the viral video below:

Man reluctantly gets into pond. pic.twitter.com/1YVaWitfMz

Since being shared on Twitter one day ago, the video has collected more than 1.7 million views and hundreds of amused comments.

"The way that man walks tells you he's had to do this before. Dog equivalent of a small child at the back of a Bouncy Castle," wrote one person in the comments section.

"Pure joy on the dog's face. Delightful" another said.

"I love the slow, tired walk of resignation. I can almost hear him muttering 'every sodding time...'" a Twitter user remarked.