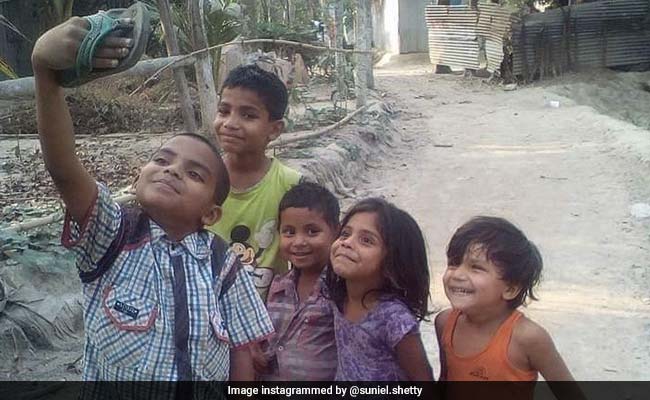 A picture of a group of children taking a selfie with a slipper has gone viral online.

"You're only as happy as you choose to be," wrote actor Boman Irani on Instagram, sharing a photograph going viral on the Internet. Looking at the picture, it would be hard to disagree. Five children smile heartily as one of them clicks a 'selfie' in the photo. A closer look reveals the selfie-taker is actually holding a slipper. It has been shared widely on social media by Bollywood celebrities like Anupam Kher, Suniel Shetty and Atul Kasbekar. Many said they were touched by the innocence captured so beautifully in the photograph, and used hashtags like #PictureOfTheDay and #Innocence to describe it.

"Things turn out best for the people who make the best of the way things turn out," wrote Anupam Kher as he shared the image.

“You're only as happy as you choose to be”. A saying that holds true for one and all!! And I'm sure this selfie deserves more likes than most. . #PictureOfTheDay #Happy #Selfie #Kids #InstaGood #InstaPic

The image has been 'liked' hundreds of thousands of times on social media platforms like Instagram and Twitter, though it is still not clear where it was taken.

But as many went "aww", superstar Amitabh Bachchan confessed that he was somewhat skeptical.

".. with due respect and apology .. i feel this is photoshopped .. notice that the hand that holds the chappal is different than the rest of his body in size  .. to his other hand by his side !!" he tweeted in response to Atul Kasbekar's post.

.. with due respect and apology .. i feel this is photoshopped .. notice that the hand that holds the chappal is different than the rest of his body in size .. to his other hand by his side !!

While some agreed with his assessment, others disputed it.

This is not Photoshop edit ...

Very possible with close angle photo the hands looking bigger .
The other chappal is there too

I think it's not photoshopped. The hand is not as big as it seems to be, if you look closely. This is a distortion because of shooting from the short distance..

Not photoshopped. One kid is wearing the other chappal.
And he is the only one who wears one. They show beautifully... happiness is not what you have, happiness is who you are ! pic.twitter.com/cDqN3Pe3Ye

What do you think of the image? Let us know using the comments section below.