"After being unable to leave, the bear began ripping the room apart but then decided he was tired and climbed up into the closet for a nap." 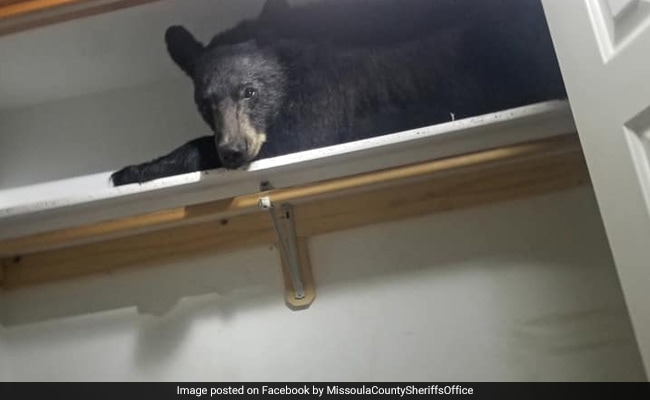 A pic of the bear was shared online by Missoula County Sheriff's Office.

A family in Montana received quite the scare on Friday morning when they woke up to find a bear in their house. According to Missoula County Sheriff's Office, at around 5.45 am in the morning, residents of a Butler Creek home reported a bear inside their house. The bear had not only managed to break into their home, he had also locked himself inside a room, destroyed it and then climbed into the closet for a leisurely nap.

"When deputies arrived, they discovered this black bear had opened the door to the mudroom of this residence and somehow managed to deadbolt the door from inside," wrote Missoula County Sheriff's Office in a Facebook post that has gone viral online. "After being unable to leave, the bear began ripping the room apart but then decided he was tired and climbed up into the closet for a nap."

Cops added that the bear looked unimpressed with their presence, only yawning and refusing to come down. He was eventually transqualised in order to be relocated.

The police, meanwhile, ended their post with a warning and a Goldilocks joke, writing: "This is another good reason to lock up, as we also have unconfirmed reports that he tried two other closets before he decided this one was juuuuuust right (kidding)! But seriously, lock up!"

Read the full post and see pictures of the sleepy bear below:

Since being shared online, the post has gone viral with over 7,500 reactions and over a thousand comments - many referencing Goldilocks too.

"I am so glad you all treated the bear with love and respect," said one person in the comments section. "So happy the bear wasn't killed, was released back into its own habitat," said another.