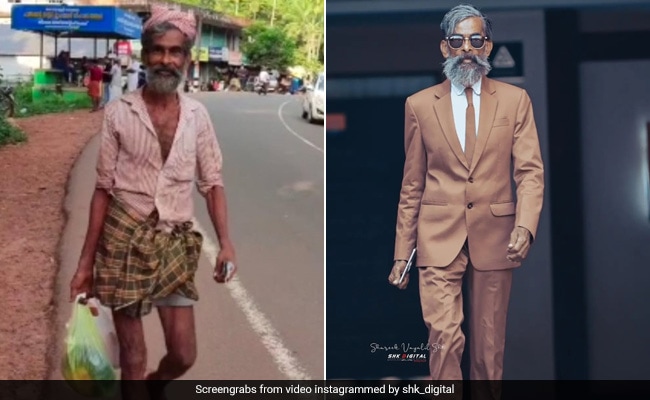 Mammikka, 60, is a daily wage earner from Kerala.

A 60-year-old daily wage labourer from Kerala is making waves online with his swish makeover. Mammikka, who belongs to Kerala's Kozhikode district, traded his faded lungi and shirt for a suit and sunglasses while posing for a local brand. Pics from the photo shoot, captured by photographer Shareek Vayalil, have gone viral online, with thousands of people complimenting the newly-minted model.

Mammikka owes his newfound fame to photographer Shareek Vayalil. According to Manorama News, Shareek had taken a photo of Mammikka and posted it on his Facebook page earlier. The photo went viral for the labourer's resemblance to actor Vinayakan.

Soon afterwards, Shareek asked Mammikka to model for a wedding suit company he owned. Before the photo shoot, the 60-year-old underwent a makeover which was captured in a video that has been watched by thousands of people on Instagram. The video has racked up over 23,000 views since being shared last week.

The photographer says that he could think of no one better to model for his company than Mammikka. Photos from the photo shoot prove he wasn't wrong. The pics show Mammikka dressed in a classic blazer and trousers, with an iPad in hand.

While many Instagram users dropped fire emojis in the comments section to express their appreciation, others complimented the labourer-turned-model for taking on a new role with aplomb.

According to News18, Mammikka says he would now like to try modelling alongside his regular job as a daily wager.