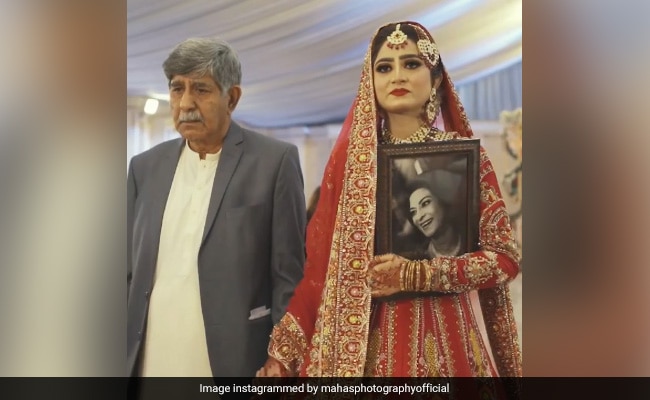 A bride entered her wedding holding a picture of her late mother.

A touching video of a bride entering her wedding venue with a portrait of her late mother in hand has left thousands of viewers emotional. Footage from a wedding in Pakistan showed the bride getting teary-eyed as she entered the venue holding a photograph of her mother. Dressed in a red bridal outfit, she was seen entering the venue with her father, who also looked visibly emotional.

Footage of the emotional moment was shared on Instagram by photographer Maha Wajahat Khan, who dedicated it to all daughters who have lost their mothers. In the video, relatives of the bride were also seen wiping away their tears and comforting her. The 57-second clip ended with a shot of the bride and her father hugging during her vidaai or formal farwell.

Since being shared two days ago, the video has racked up over 2.8 lakh views and more than 800 comments.

This, of course, is not the first time that a video from a wedding has won hearts on social media. Earlier this year, footage of a bride refusing to enter the venue until her favourite song was played had gone massively viral online. Before that, a video that left many amused showed a bride and groom going to great lengths to maintain social distancing during their Covid-era wedding.