The video showcases the playful antics of a group of baby monkeys and it's winning the internet. 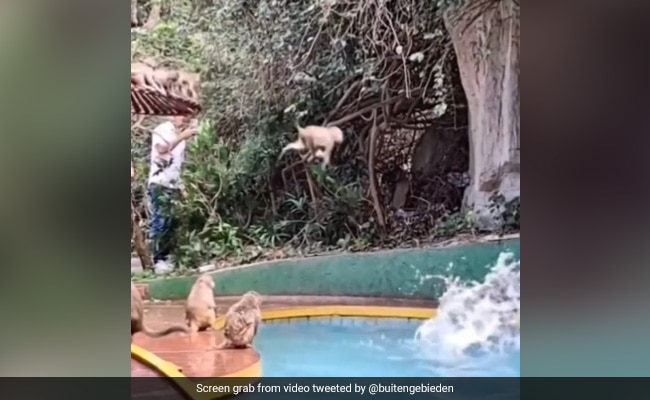 A group of baby monkeys had a fun pool party

Monkeys are playful and mischievous creatures, who like to have fun just like humans. In case you are looking for a wholesome video to cheer you up amid the pollution gloom, we just have the right clip for you. It's a video which showcases the playful antics of a group of baby monkeys and it's winning the internet.

Shared on Twitter account Buitengebieden, which often shares adorable animal videos, the now-viral clip shows baby monkeys having the time of their lives by jumping into a swimming pool. "Monkeys having fun," reads the caption of the post.

In the video, the monkeys are seen climbing up on a shade beside the pool and taking turns to jump into the pool from it. The monkeys seem to really enjoy it and even know how diving in a pool works, probably by observing and learning from humans.

The video has amassed over 1.5 million views and around 5,000 retweets since being shared online. Internet users found the clip absolutely delightful and expressed the same in the comments section of the post. One user wrote, "They don't have to buy groceries or work or pay taxes or vote literally they just vibe out where did we as humans go wrong." Another commented, ''This is the greatest video ever!!" A third wrote, "looks like they enjoying their lives'', while a fourth added, "These chaps know how to have fun.''