Read inOther Languages
This Article is From Sep 28, 2020

Video: Man Gets Kicked In The Face, Falls Into Water In Proposal Gone Wrong

Luckily, the couple was not injured. 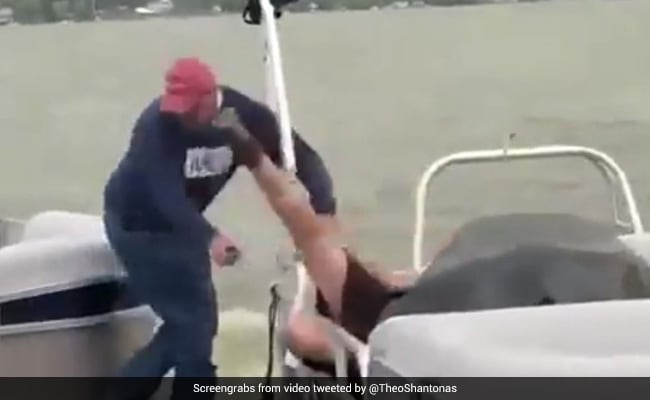 A proposal gone wrong: This man's boat proposal did not end the way he had anticipated.

A man's marriage proposal was ruined by a runaway boat that sent him tumbling into water. A video of the proposal gone wrong was shared on Twitter by Theo Shantonas, where it has gone viral with thousands of views and puzzled comments.

In the video, the unnamed man can be seen standing on one boat, while his fiancee-to-be stands on another. The scene was presumably filmed by someone standing on the deck. The man brings the two boats together and stands on the edge of one as he fishes out a ring and pops the big question. His partner, smiling broadly, appears to say yes, and the two reach out to embrace.

Things, however, take an unlucky turn when the woman accidentally hits her boat's controls, sending it flying forward. As she lurches forward, shocked by the sudden movement, her leg hit the man in the face and sent him falling into the water.

Luckily, the two were not injured.

The short clip has garnered over 1.4 lakh views and hundreds of amused comments.

"That is the funniest thing I have seen in a long time," wrote one Twitter user.

"Thank you for the laughter and joy. I hope the groom is ok and congratulations to both of you!" another remarked.

Some wondered what happened to the person filming the video and remarked upon its abrupt ending.

Others speculated that the person recording the whole incident also got knocked down as the boat hit the deck.