Video: Man Blows Up Yard Trying To Kill Bugs, Doesn't Even Destroy All Of Them

2.6 million views for this video 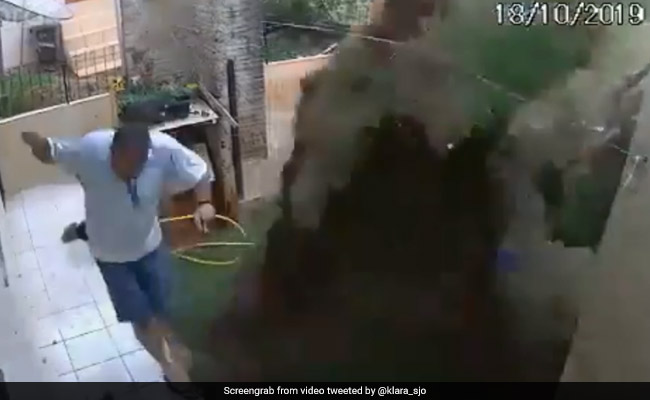 A man in Brazil blew up his yard while trying to kill cockroaches.

A man in Brazil accidentally blew up his yard while trying to kill some cockroaches, and a video of the incident is now viral on social media. Cesar Schmitz, 48, tried to get rid of the bugs last Friday - but the plan backfired when the resulting explosion destroyed his lawn.

"My wife complained that there was a lot of roaches invading our garden," said Mr Schmitz, according to the New York Post. "She is scared of them and begged me to destroy their nest under the ground once and for all."

To destroy the nest, Mr Schmitz first poured gasoline into the hole, and then began to throw matches onto it. The video, captured on his home surveillance camera, shows the lawn exploding. A table flies into the air while his dogs scamper away, frightened.

To make matters worse, it appears that the unlucky man did not even manage to kill all the bugs - one can be seen running away in the video, according to HuffPost.

Dude went to the Yosemite Sam school of how to deal with critters. pic.twitter.com/40ElxsFPem

Since being shared on Twitter on Sunday, the video has collected over 2.6 million views and a number of amused comments.

Pfft I want to hear him explain it to his wife. 🤣

This beagles deserve a better owner.

According to Daily Mail, Mr Schmitz is cleaning up his lawn and will replant it. He says that the roach infestation has been solved.

Last year, a man in Fresno, California, set his house on fire while trying to burn some spiders.