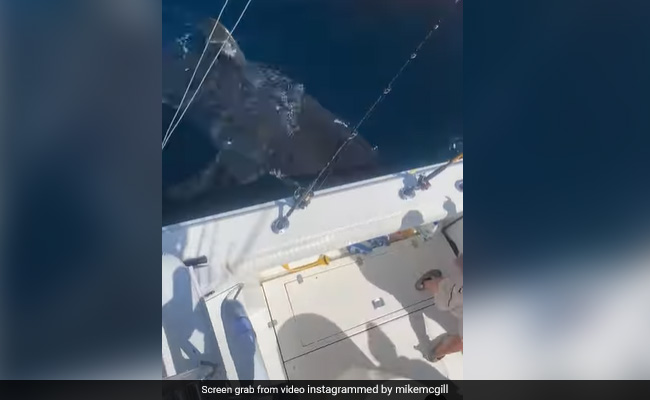 A video of a massive great white shark circling a fishing boat in bloody water after preying on a sea lion has left the internet astonished. The short clip was shared on Instagram by Mike McGill. The incident took place nearly 23km off Mission Bay, in San Diego, United States.

In the video, a great white shark can be seen approaching the boat while people yell "oh my god!" Moments later, a man can also be seen looking over the edge of the vessel, directly down the massive creature. "He's kissing the boat," a person is heard saying in the footage.

"So this happened yesterday 14 miles out on our friends boat who leave from the same dock in Mission Bay," Mr McGill captioned the post.

In the clip, blood can be seen seeping out into the water where the shark was swimming. According to Newsweek, a carcass of a sea lion was floating a few feet away from the boat.

"He's a monster dude," a person in the video can be heard saying. At the end of the video, the shark is then seen swimming back toward the carcass and disappearing into the depths.

As per CBS Los Angeles, the great white shark swam under the boat and then circled it, before returning to feast on the carcass of the sea lion. Separately, Mr McGill, in the comment section, clarified that they were not trying to bait the shark by putting the carcass in the water.

Meanwhile, the video has left netizens amazed. One user wrote, "Well at least you all could rest easy knowing he wasn't starving and on the hunt for boat morsels!" Another said, "I'm scared watching this video on dry land."