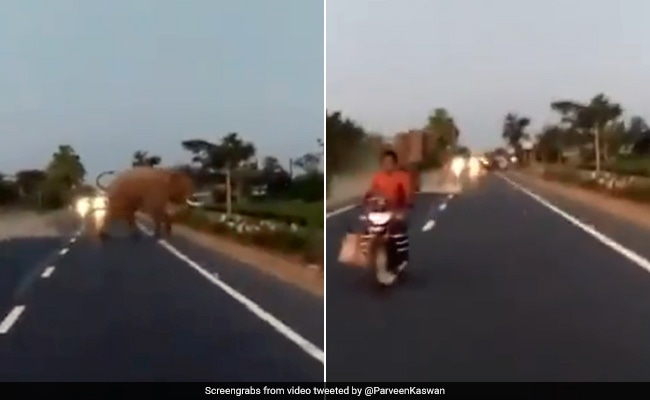 A video shows a biker narrowly missing an elephant while crossing a road.

A video shared by an Indian Forest Services officer shows a biker crossing a road that had been blocked to allow an elephant to pass through. IFS officer Parveen Kaswan criticised the biker while sharing the video on Twitter Thursday.

According to Mr Kaswan, the person riding the bike decided to cross the road even as others waited. In his impatience to get across the road, he was almost hit by the elephant. The video shows him zooming past the animal as it crossed the road. In the background, other vehicles can be seen waiting for the elephant to cross.

Mr Kaswan, while sharing the video, said that the most difficult part of wildlife management is actually managing the humans. "Even after blocking the road by staff this person decided to cross it while others were waiting," he wrote. "Just missed by fraction of a second from becoming a memory."

He also urged others to never do this. Take a look at the video below:

You know what is most difficult part of #wildlife management. Managing the #humans. Even after blocking the road by staff this person decided to cross it while others were waiting. Just missed by fraction of a second from becoming a memory. Don't do this ever. pic.twitter.com/CbL0e3gCDj

Since being shared online, the video has been viewed more than 25,000 times. In the comments section, many agreed with Mr Kaswan while criticising the biker's impatience:

At times Humans can be the "most uncivilized animal" on Earth, after that the blame will come on the Wild Animals as well as the staff managing & protecting the wild!

Patience is a virtue which is not in possessed by everyone.

The small family of elephants on a morning walk. Today. pic.twitter.com/CG6LFPboWM