The alligator was relocated to a safe location after it was trapped. 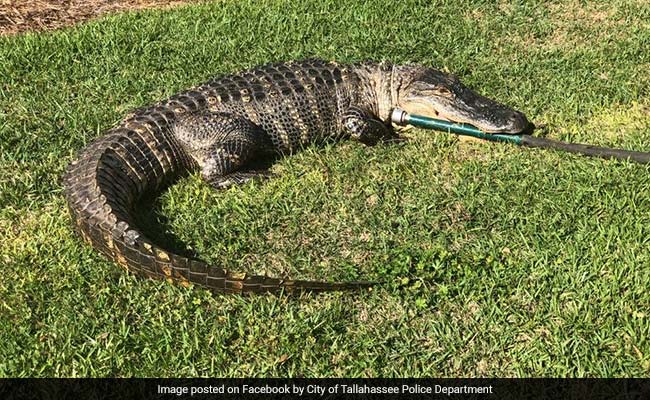 City of Tallahassee Police Department shared a pic of the huge alligator on Facebook.

Florida residents are no strangers to alligators - but this one managed to surprise even Floridians. A huge 8-foot alligator was found strolling around the SouthWood neighborhood in Tallahassee, Florida, on Sunday.

Residents of the neighbourhood contacted Tallahassee police, who in turn called the Florida Fish and Wildlife Conservation Commission.

A trapper then subdued the reptile, after which the City of Tallahassee Police Department shared pictures of the enormous gator on Facebook.

"Southwood residents got quite the show Saturday afternoon when an alligator, approximately 8 feet long, showed up in the neighborhood," they wrote.

"I've lived in this neighborhood for 4 years and we have gators by the water all the time. The only reason everyone freaked out was because he was strolling too close to the houses," explained one person in the comments section.

"I would have dropped dead if that had been near my house!! Glad to hear no one was hurt," another wrote.

According to Florida Fish and Wildlife Conservation Commission, the alligator was relocated to a safe location after it was trapped.

Alligators are a common sight in Florida. In February, a Merritt Island woman who heard someone knocking on her door opened it to find a 10-foot gator outside.