After Uttarakhand Flood Disaster, A Dog Waits For His Caretakers Outside Tunnel 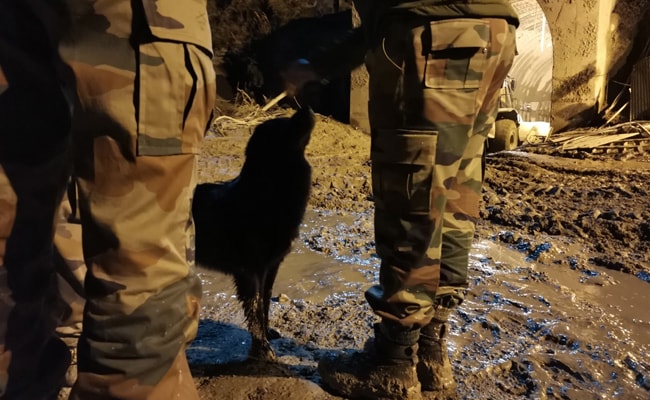 A dog, affectionately named Blackie, spent days waiting outside the sludge-choked Tapovan tunnel in Uttarakhand as rescue teams battled against odds to save those trapped inside. The dog has been waiting at the site of the Tapovan hydel project for his caretakers after the Uttarakhand glacier burst on February 7 triggered a devastating flash flood in the state's Chamoli district.

Blackie was born near the site and grew up around the people who worked there.

"We would give him food, a sack to sleep on when we worked. Blackie would be around during the day and would leave in the evening when we did," said Rajinder Kumar, a worker who managed to escape when the flooded Rishiganga blocked the tunnel.

According to Times of India, Blackie was not around when the flood hit on Sunday evening. When he returned on Monday morning, he could not find any of his caretakers.

"He must have realised something was amiss. The place was full of strangers who paid no attention to him," said Rajinder Kumar. Rescue teams tried to shoo him away, "but he just kept coming back. He just wouldn't leave," Mr Kumar told the Times of India.

"The dog has been roaming near the tunnel and was likely someone's pet who is trapped inside," an army officer told news agency AFP. "It entered the tunnel twice and looks distressed. We are trying to feed and comfort it."

Indian Forest Service officer Parveen Kaswan shared a video on Blackie's moving story on Twitter. "This will melt your heart," he wrote. "He is Blackie & he is most probably waiting for his owner to be rescued from the tapovan tunnel. What a heartwarming story."

This will melt your heart. He is blackie & he is most probably waiting for his owner to be rescued from the tapovan tunnel. What a heartwarming story. Via @AFPpic.twitter.com/yVG6A58DTW

The video has received a lot of love on the microblogging platform.

"Don't know about heart warming, breaking my heart right now. Hope many others come out from this serious tragedy. Dogs are your best friend," wrote one person.