The rescue teams from the Army camp, located just 3 km away, faced difficulty reaching the area due to road blockades in many places owing to the bad weather conditions.

The Army has released first visuals of rescue operations in Uttarakhand after a glacier broke, triggering an avalanche close to the Indo-China border on Friday. In the visuals, an Army helicopter is seen landing on a helipad surrounded by icy mountains. A man is also seen being pulled out from under ice by a group of soldiers, after which they carry him to safety.

In total, eight bodies have been recovered and 384 people rescued by the Army today. Of those rescued, six are said to be critical and currently under medical treatment.

The avalanche, which followed a glacier burst incident near the India-China border, hit a Border Roads Organisation (BRO) detachment and two labour camps in the area. The BRO was working on repairing a damaged road in the area.

The rescue teams from the Army camp, located just 3 km away, faced difficulty reaching the area due to road blockades in many places owing to the bad weather conditions. 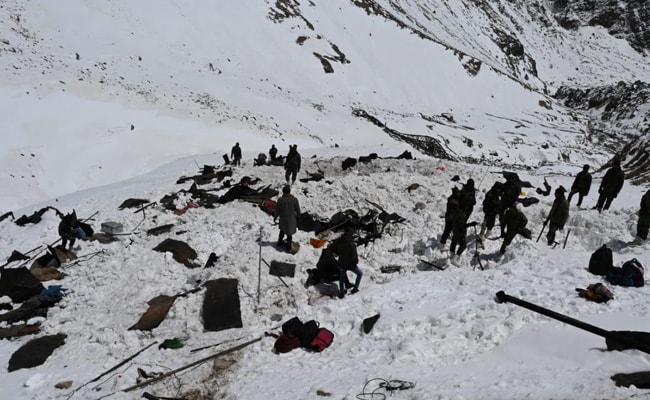 The Army and the State Disaster Response Force are currently conducting a search and rescue operation in the area that has witnessed massive destruction from the glacier burst and the subsequent avalanche. Multiple landslides have cut off road access at nearly five locations. Teams of the Border Roads Task Force (BRTF) from Joshimath are working to clear the roads from Bhapkund to Sumna since last evening, officials said. It is expected to take another six to eight hours to clear this complete axis, they added.

"The BRO is still at work but the connectivity is broken. Due to heavy snowfall, many roads are still blocked. However, no damage has been caused to the surrounding villages and cattle. Only roads have been damaged," Mr Rawat said after the aerial survey.

The area has been experiencing heavy rain and snow for the last five days, the officials said, adding, the communication lines in the area have also been damaged.

In February, a glacier burst incident had taken place at Joshimath in Chamoli district, leading to a massive flood in the Dhauli Ganga river and causing large-scale devastation. The flash flood swept away two state hydro-electric projects. Over 50 bodies were recovered and hundreds were declared missing.