Locals, fearing the snakes, refused to climb down the well. 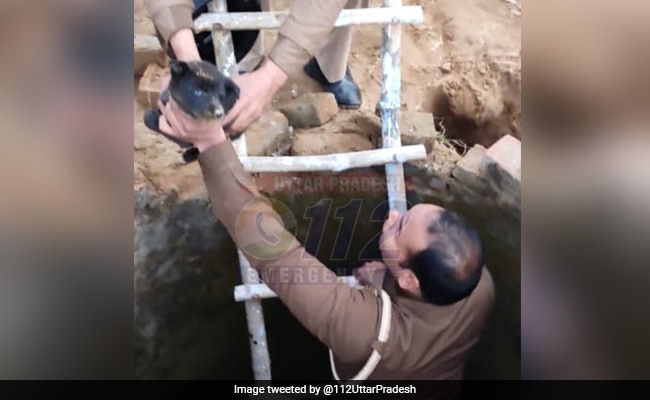 A cop climbed down a snake-infested well in Amroha to rescue puppies.

Twitter is full of praise for an Uttar Pradesh Police official who climbed down a snake-infested well to rescue three puppies. The cop stepped up to save the puppies after others at the scene, fearing the snakes, refused to go down the well.

According to a Twitter post by 'Call 112' - an Uttar Pradesh Police handle dedicated to emergency services for immediate assistance - the incident took place in Amroha.

Their post, written in Hindi, explained that three puppies fell into a well in the town. While locals gathered around the well, they refused to climb down as it was infested with snakes. On seeing this, the police official decided to climb down the well to rescue the puppies.

A picture shared with the tweet shows the police official climbing out from the well and handing a small black puppy over to a colleague.

Posted on Wednesday, the tweet has been inundated with comments from people praising the cop. "A very noble deed," wrote one commenter. "You have won our hearts," said another.

This act deserves a thousand claps.Salute to humanity.

Big salute to such dutiful officers

Let us know what you think of this incident using the comments section.