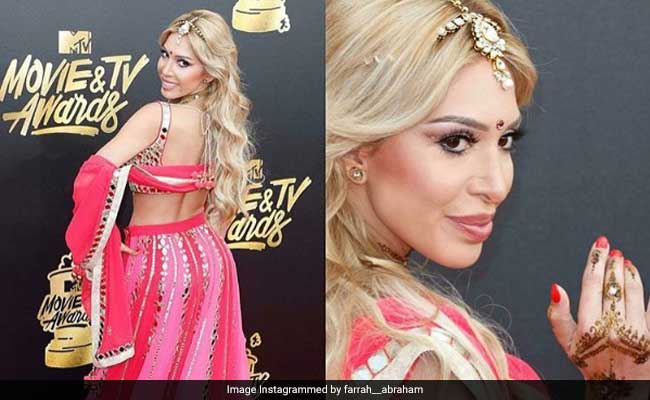 New Delhi: American reality television star Farrah Abraham isn't waiting to hear what the fashion police has to say about her outfit at the MTV Movie and TV Awards. She has already named herself "Best Dressed." Well, on Instagram anyway. The Teen Mom OG star wore a bright pink lehenga, mirror-work choli, a bindi, maang tika, mehendi and lots and lots of bangles to the awards show held in Los Angeles on Sunday. She has posted a number of pictures of her "Bollywood-inspired" look on her official social media handles and many online are accusing her of cultural appropriation.

@TeenMom NO one is loving that look. I swear to you.

"This is nothing to be proud of...using the cultural Indian outfit as a fashion statement is so insulting," writes one person on Instagram.

"Can you not wear Indian clothes...it's not a costume," writes another.

Imagine wanting to be Simons wife this bad #farrahabraham#mtv#mtvawards talk about lack of respect for a culture @TeenMompic.twitter.com/O3tlV42m1D

But not all the comments are negative:

One of the best Dressed imo... pic.twitter.com/52HT3Ocqjt

"So Bollywood Farrah. This look actually fits you better than any other look...Maybe you should pull this off more often," suggests another on Instagram.

"She's wearing it (the outfit) to support...an Indian-owned boutique. They approved it and dressed her," claims a person on Instagram.

The TV star tells TooFab she "wanted to bring culture to the red carpet" in this look and isn't worried "at all" about cultural appropriation backlash on social media. "I think this will inspire others to embrace new cultures and have good experiences."

In fact, she has been retweeting some of the negative comments directed at her on Twitter.

​She goes on to say the look made her feel "amazing, Bollywood and sexy!"