It was spotted by actors Sharon Stone and Jessica Alba 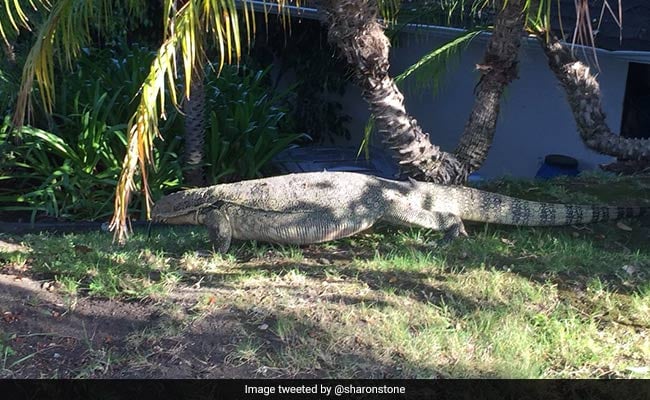 Jessica Alba seemed to have spotted the same creature as well.

Lizards usually give most people the heebie-jeebies. However, when they're as huge as the one spotted by Hollywood actor Sharon Stone, they can cause panic, shock, fear and other emotions one doesn't know one could even feel. We're guessing that mix of emotions is probably what the actor felt when she saw a huge lizard casually walking down her street in Los Angeles' posh Beverly Hills - home to many Hollywood stars.

"This is walking up my street!!!! What is going on!!!!!!!" she tweeted on June 4. And if a situation like this doesn't justify all those extra exclamation marks, we're not sure what does.

In the same thread, Ms Stone identified the giant lizard was a 10-foot-long Komodo dragon and said it had eventually been picked up by animal control.

Actor Jessica Alba also seemed to have spotted the same creature. Her video, posted on Instagram shows the reptile being handled by an official.

That leash around its neck hardly makes it any less daunting.

Beverly Hills Police Department identified the reptile as a monitor lizard that had escaped from its owner's residence in the neighbourhood.

Here's how social media reacted to the videos:

I don't know but one thing is certain. It's not your street anymore. It...belongs to him now. pic.twitter.com/zouxPEERkA

Sorry, Sharon. Walter got out again. Thanks for the heads up.

The Jurassic World promos are just going too far, @prattprattpratt & @BryceDHoward . Tell marketing to tone it down a notch. #JurassicWorld

Promoted
Listen to the latest songs, only on JioSaavn.com
As it turns out, there may have been another reason why Sharon Stone reacted the way she did when she saw the reptile. A Komodo dragon caused trouble in the actor's life once earlier.

Back in 2001, the Basic Instincts actor and her then-husband, American journalist Phil Bronstein visited the Los Angeles Zoo where the latter was attacked and bitten by a Komodo dragon, reports SFGate. Mr Bronstein, who had always been fascinated by massive lizards, had been invited to step into the reptile's enclosure by a zookeeper, who assured him it was perfectly safe to do so. The accident left him with a crushed big toe that needed to be reconstructed through surgery.Click for more trending news