"It was amazing they remembered each other after 10 months of not seeing each other." 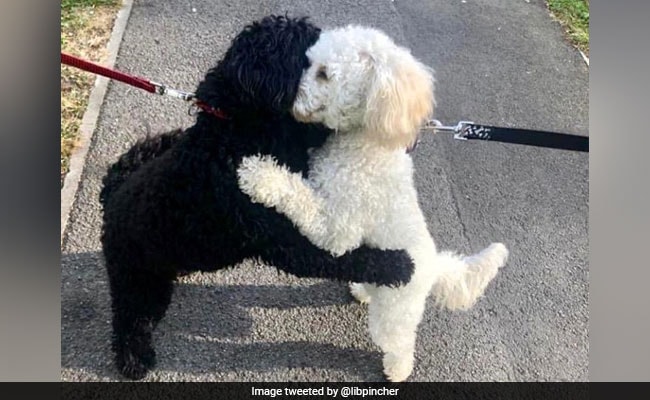 Rosie and Monty met each other unexpectedly during their regular walks.

What started as a regular walk soon turned into a family reunion for two long-lost dog siblings in the UK. Photos that have gone massively viral on Twitter show two adorable dogs hugging each other on the road after crossing paths during their evening walk. While it is common for dogs to get excited on seeing other dogs - this incident was special as the two pooches seemed to recognise each other and their owners discovered they were born to the same litter.

The photos were shared on Twitter by a user whose father recounted the incident to her. "So, Dave was out walking his dog, and there was a couple walking towards him with a white version of his dog," Libby Pincher's father wrote to her in a message. "Turns out they are brother and sister from the same litter."

Instead of playing like dogs normally do, the two cockapoos reached out to hug each other, giving the Internet photos that have delighted thousands around the world.

pls look at what my dad sent me this morning I cannot even????❣️???? pic.twitter.com/QTy5J8uEwZ

The pics have collected over 9 lakh 'likes' and thousands of comments since being shared on the microblogging platform two days ago. Take a look at some of the reactions below:

Okay but we all agree that Dave and that random couple now have to move in together right? pic.twitter.com/iX8SLmYanh

According to The Dodo, named Monty and Rosie, were born to the same litter in June last year. While there were six puppies in the litter, Monty and Rosie spent all their time together before Monty was adopted by another family.

"It was so lovely, they both just jumped up and hugged each other," said Rosie's owner Susan Killip.  "It was amazing they remembered each other after 10 months of not seeing each other."