"Are you allowing your maid to knead atta dough by hand? Her hands may be infected," read the ad for Kent's Atta and Bread Maker. 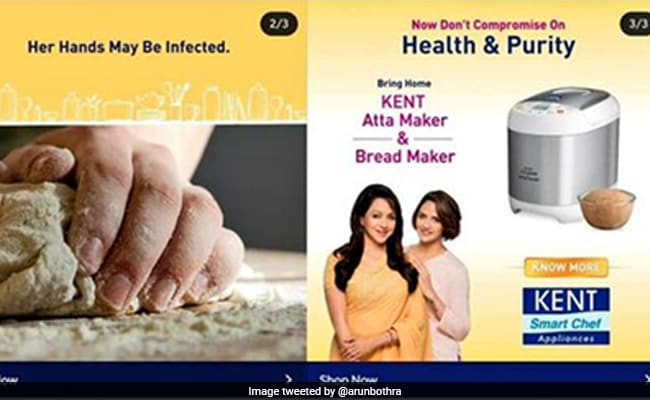 Healthcare products company Kent RO Systems has issued an apology after a huge backlash over an advertisement that many criticised as "classist" on social media. "Are you allowing your maid to knead atta dough by hand? Her hands may be infected," read the ad for Kent's Atta and Bread Maker, encouraging customers to invest in a product that would knead dough hands-free.

Kent issued a statement on Twitter this afternoon. "Please accept our sincere apologies for having published the Ad of Kent Atta & Bread Maker. It was unintentional but wrongly communicated and it has been withdrawn," wrote chairman Mahesh Gupta. " We support and respect all sections of the society," he added.

The ad, which has now been withdrawn, came amid the coronavirus pandemic - a time when many domestic helps have been left without work due to lockdown restrictions in place since March. Many Twitter users slammed the company for suggesting that only a house help's hands could be unclean.

"In a classist way the ad suggests that only a maid's hand could be unclean," wrote one Twitter user while sharing screenshots of the atta maker ad which features actor and brand ambassador Hema Malini.

"Not only is it unfair to service demographics by assuming all are unhygienic, also assumes me or my husband do not knead atta," another Twitter user wrote.

I presume #Kent Atta maker doesn't want my business. Not only is it unfair to service demographics by assuming all are unhygienic, also assumes me or my husband do not knead atta. A great product bites the dust cos the Ad agency/Product Manager couldn't see beyond their biases. https://t.co/lVCmjNG5Qp

Screenshots of Kent's atta and bread maker advertisement, which first appeared on Instagram, have been going viral on social media. Take a look at some of the reactions:

IPS officer Arun Bothra was among those who criticized the ad.

Kent is infected by some impure hearts and unhealthy minds. pic.twitter.com/3JZZEEApz1

Filmmaker Rakesh Sharma also joined the chorus of voices criticising the ad and slammed the company for "preying on fears" during a pandemic.

Shame on you #Kent, for preying on fears!
And this awful, obnoxious, ill-timed ad campaign.

ps: Any evidence that the virus survives the hot tawa and the reheating over direct gas flames, to get into the cooked Roti/ chapati? https://t.co/6s3405cgXX

Many Twitter users agreed that the advertisement would only add to the discrimination that domestic helps are facing. Many Residents Welfare Associations in the national capital have banned the entry of helps, suggesting that they could be the potential carriers of the novel coronavirus as they live in densely populated clusters.