17 million views for this pineapple video 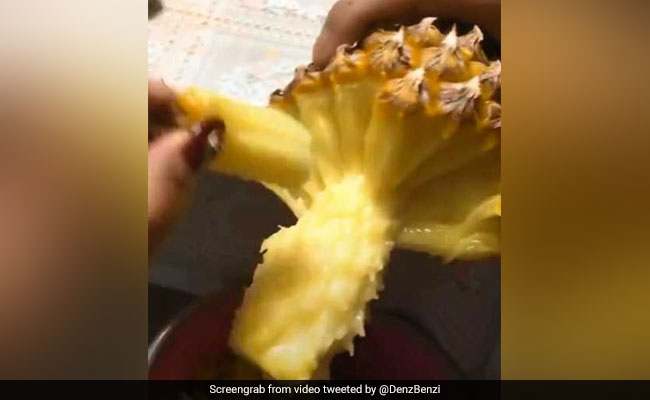 A pineapple video has netizens surprised.

After dividing social media into two camps with the pineapple on pizza debate, the divisive fruit is back and going viral again. A video that is gaining a lot of attention online might make you question everything you though you knew about eating pineapples. It shows a way to eat pineapples that you may not have seen before - and it has left people stunned.

The video shows a woman 'peeling' a pineapple - pulling chunks of the fruit away in sections to eat. The pineapple appears to have been cut in half.

Since being shared online, the video has collected over 17 million views on Twitter alone. It has also elicited a ton of reactions, most from people shocked by a hitherto-unknown way of eating pineapples:

Some tried the method for themselves:

Saw it yesterday, tried it today... works really well for eating. Thanks for sharing.

Anything for making a juice? pic.twitter.com/1cL989Aror

Just tried it. Fake news. Sore fingers. Kitchen is a mess. It kind of works but it's useless.

And others claimed that the method worked, but came with the caveat that the pineapple had to be ripe:

I feel like it has to be a certain degree of ripeness would have to be present for this to work so perfectly. Caveat Emptor.

This is how a baby pineapple looks like. At this point you can clearly see its distinctive berry feature. Compare it with raspberries. They look (in one way or another) similar. The difference is, raspberries do not grow big. pic.twitter.com/KPVodbTlBJ