Read inOther Languages
This Article is From Oct 27, 2020

Video: TV Reporter Robbed Of Phone As He Prepared For Live Broadcast

Diego Demarco was gearing up for a live broadcast from the city of Sarandi when a man grabbed his phone and ran away. 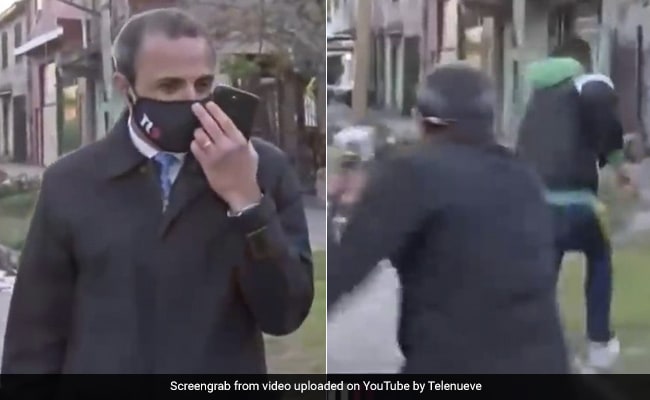 Diego Demarco was robbed of his phone as he prepared to go live for a news station.

A TV reporter was robbed of his mobile phone as he prepared to do a live broadcast in Argentina. Diego Demarco was gearing up for a live broadcast from the city of Sarandi when a man grabbed his phone and ran away, reports Daily Mail. The shocking incident was captured on camera and the footage has been widely circulated online.

On Tuesday, Mr Demarco, a reporter at En Vivo El Nueve, was about to speak to a rolling camera for the news station when a man in a hoodie snatched his phone and ran. The reporter was seen giving chase to the robber and shouting "Give it to me. My phone was stolen," in Spanish.

El Nueve shared the footage on social media, writing that their reporter was robbed shortly before he was set to go on air.

Luckily for Mr Demarco, neighbours who saw the scene unfold were able to retrieve the phone and return it to its rightful owner.

According to Filo News, people of the neighbourhood recognised the thief and knew where he lived. They were able to get the device back within minutes after convincing the thief to hand it over.

"I am grateful that this has happened to me in this neighborhood because there is a commitment and solidarity," said Mr Demarco. "Right away there were like 10 neighbors apologizing to me. They themselves were the ones who activated a little and knew who the kid was," he added.

The journalist has said that he does not want to report the thief and that he only wanted to get his phone back.