Over one million views - and counting 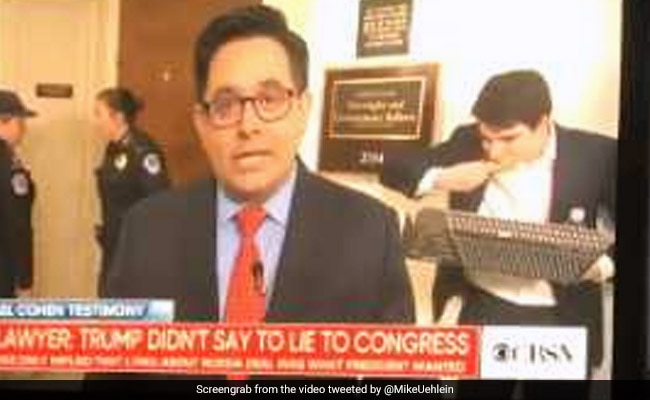 'Hallway pizza guy' has found many fans online for his photobomb act.

Move over, pizza rat. The internet has a new hero, and it's a pizza-eating man who hilariously photobombed a reporter on air. A video going viral with over a million views on Twitter shows a congressional staffer in the US unintentionally photobombing a CBSN reporter while eating pizza - and the Internet is loving it.

According to Mediaite, the video was shot while the reporter was covering former Donald Trump attorney Michael Cohen's testimony on Wednesday afternoon. In the video, as he speaks on camera, a congressional staffer behind him in the hallway proceeds to take a big bite out of his pizza. The short clip captures the moment 'Hallway pizza guy' realises he's in the shot - and it will make you laugh out loud.

tfw you go to eat your hallway pizza and get told you're in the live shot pic.twitter.com/ppkq9PJraO

Netizens haven't stopped laughing at the hilarious photobomb since it was shared online. See some of the best reactions below:

This is the only pizza gate I care about.

Me right after I close the door when getting delivery. https://t.co/CIHC6mdvyU

The video even earned the photobomber a loving nickname: Hallway pizza guy

We are all Hallway Pizza Guy right now

Also please don't dox the Hallway Pizza guy, he was just trying to have his lunch.

Hallway pizza guy just trying to get a bite on a busy day. He's so hungry.

This isn't the first time an unsuspecting news anchor has been photobombed on air. Last year, a scarlet bird landed on a reporter's head during a live broadcast, and the hilarious footage went viral.