Trending: What You Should Look Forward To In 2017, With Love From AIB 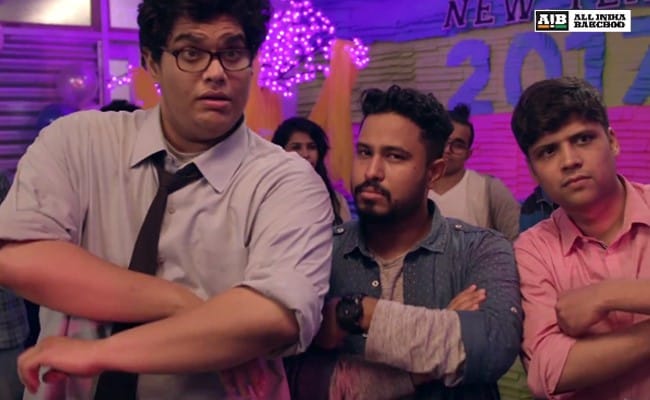 In several ways, 2016 has been fairly cheerless (goodbye, George Michael) and everybody's going to be glad to see the back of it. 2017 is already upon us and, happily, there's a lot you can look forward to in the year to come. Like what, you may wonder. Here's a whole song detailing what to expect and you can thank comedy collective AIB for it. Their new video, shared on December 25, has been trending on YouTube.

Titled 'The 2017 Song #PeekeMatChala,' the video shows a typical New Year's Eve party, from which AIB member Ashish Shakya is trying to leave so he can go to his next party. The only problem is he's four beers down and wants to drive. His buddies (fellow comics Tanmay Bhat, Abish Mathew and Rahul Subramanian) stop him, pleading with him to take a cab instead but he's not listening to reason.

"Don't you want to be alive in 2017," the friends ask. "No, 2016 was rubbish and depressing and I have no hopes from 2017," he answers. The friends beg to differ and want to prove the new year will be better. And how better to explain this than with a song, of course.

Set to the tune of Yeh Jawaani Hai Deewani track Badtameez Dil, the song lists several things that will apparently happen in 2017. So we can potentially look forward to - US President-Elect Donald Trump being impeached, freedom of speech, India winning the Champions Trophy, the return of Pakistani actor Fawad Khan and television show Sarabhai vs Sarabhai, among many other things. There's also something about Sonam Gupta not being bewafa in 2017 and, most importantly, everyone will finally find out why Kattappa killed Baahubali. If these aren't things worth living for, really, what else is?

The video makes for a fun watch and shows several other well-known stand-up comedians like Gursimran Khamba, Kanan Gill, Kenny Sebastian and more.

Promoted
Listen to the latest songs, only on JioSaavn.com
Watch the video below to find out everything that you should look forward to 2017. (Viewer discretion advised. Some contents of this video may be unsuitable for children.)