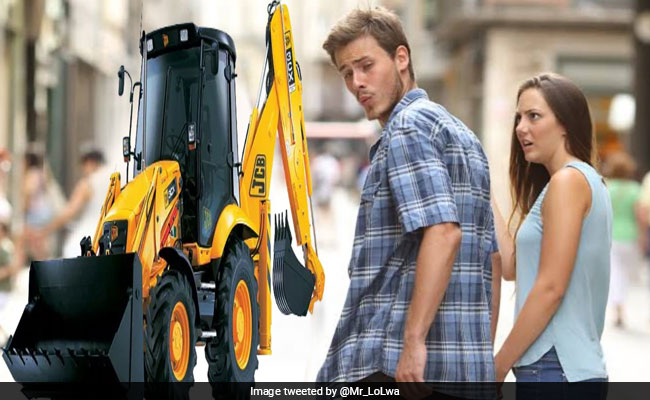 If you're active on Twitter, you may have noticed a strange hashtag that trended through Monday evening, and continues to do so this morning. The hashtag - #JCBKiKhudayi - has people sharing pictures of excavators and memes based on it. Bizarre, right? You're not alone in thinking that. Literally translated to 'JCB's digging', the  #JCBKiKhudayi memes apparently began when Twitter users noticed videos of JCB excavators had collected millions of views on YouTube.

JCB khudayi jokes are so subtle yet so funny. Apparently the jokes are about how jobless are people to watch JCB digging videos on YouTube with these videos getting millions of views 😁 pic.twitter.com/AGaIWl04kg

Now these memes have taken on a life of their own on the microblogging website. The #JCBKiKhudayi memes have even been curated into their own Twitter Moment.

Take a look at some of the funniest ones below:

While some used the hashtag to comment on the "joblessness" of people watching JCB videos and making memes on them, other just jumped at the opportunity to create hilarious jokes:

JC Bamford Excavators from UK, universally known as JCB, are the most well-known excavators in India. In fact, the word JCB has now become synonymous with excavators. The #JCBKiKhudayi memes have prompted JCB to issue a statement on Twitter, thanking Indians for the love!

We are truly humbled by the love shown for JCB in India today, with #JCBKiKhudai trending across the country! Thank you to our customers and fans for your enthusiasm and support! With @JCBIndiaLtd, you can #ExpectMore. #JCBkikhudayipic.twitter.com/4oGhCAqcyJ

What do you think of these #JCBKiKhudayi memes? Let us know using the comments section below.