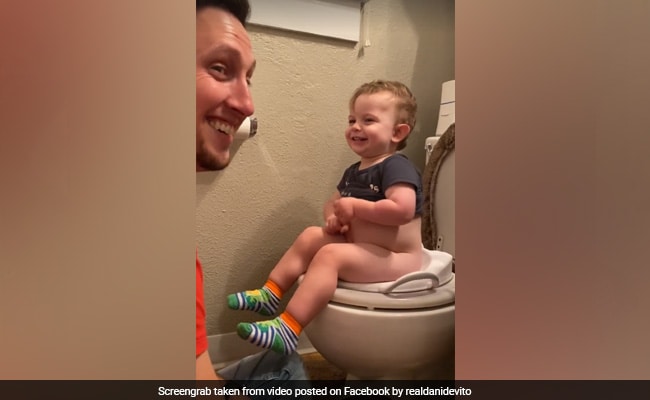 On October 24, Dani DeVito posted a video on Facebook that instantly catapulted her son to viral Internet fame - even amusing actress Vidya Balan. The Fairmont resident shared a video of her son, two-year-old Matt, perched atop a toilet seat while his father Greg has a conversation with him.

In the hilarious video, the toddler vehemently denies pooping, repeatedly saying "I didn't poop, I peed."

It is not so much what he says than the way he says it that has his father, and millions of social media users, in splits.

"I didn't poop, I peed," Matt says again and again in a dramatic voice during the one-minute-long video. The voice is so funny that his father cries tears of laughter, which then prompts the toddler to ask "Is sad Daddy?" and reach out for a hug - before going back to his catchphrase.

The adorable video has collected over 27 million views on Facebook, where it was shared about three weeks ago. Watch it below:

The video was also picked up by parenting blog Scary Mommy, through which it collected another 12 million views, bringing the total up to a whopping 39 million.

Actress Vidya Balan was among the millions who loved the video of Matt. "The only time I'd post a video of someone...a lil cutie at that..on the pot," she wrote while sharing the video on Facebook, much to the delight of her fans.

"That was so cute. Made my day," wrote one person in the comments section. "Cuteness at its peak," another said.

Speaking to WV News, Matt's parents said they had no idea how he came up with the funny voice.

"It was a one-time thing, and he was probably saying it for about 2 minutes before I even got my phone out," Dani said. "We don't know where the voice came from. We have no idea. He's just a goofy kid. He's says it all the time now because he's randomly seen the video with us, but it's not a normal occurrence by any stretch of the imagination."