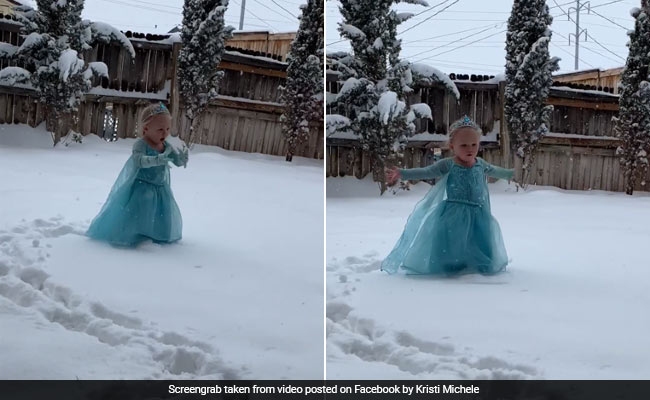 The inspiration may be Frozen, but this video is melting hearts across the world. A Texas toddler recreated her favourite Disney song 'Let It Go' from the hit film Frozen, dressed as lead character Elsa, and the adorable video has gone massively viral online.

According to Today, dressing up as Elsa, princess of Arendelle, is a near-daily ritual for two-year-old Madelyn, who loves Frozen. "Frozen is what we do, all the time," said her mother, Kristi Michele. "She loves it. When we watch the movie, she will say every line."

When a rare snowstorm hit their West Texas area on February 5, the toddler got the chance she had been dreaming of - to recreate Elsa's iconic 'Let It Go' song in real snow.

Madelyn's mother told Today that the two-year-old pleaded all morning to be allowed to go out in the snow dressed in her Elsa costume. When Kristi Michele finally allowed her to go outside "for a little bit," while wearing snowboots and several layers of tights, it resulted in a video the now-viral video

The video has collected 30 million views since being shared online, along with thousands of comments.

"She's quite the little actress! Love her passion!" wrote one person in the comments section. "Thank you for sharing this beauty with us. I just cried," said another.

What do you think of Madelyn's video? Let us know using the comments section.