The video shows the tiger growling as it walks towards the tourist vehicle. 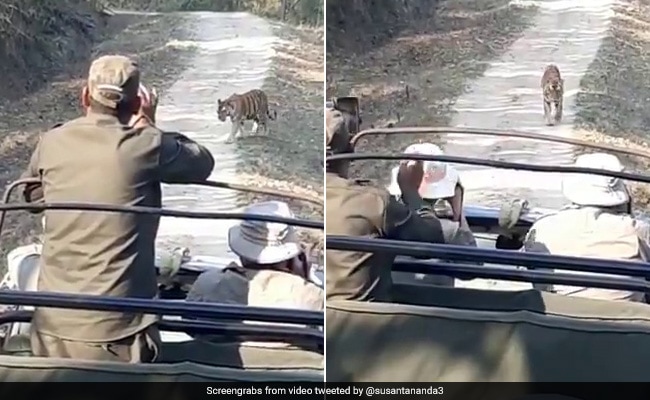 A tiger was filmed growling as it approached a tourist car in a central Indian tiger reserve.

A chilling video that has emerged from a central Indian tiger reserve shows a tiger getting too close for comfort to a tourist vehicle. The video was shared on Twitter by Indian Forest Services officer Susanta Nanda, who did not reveal the exact location where it was filmed, but said that the big cat was growling to mark its presence.

The 17-second video shows a group of tourists sitting in an open-roof jeep and talking in Hindi while a tiger stands only a couple of feet away. The tourists initially do not seem concerned about the presence of the big cat. However, as the tiger begins to walk towards the vehicle, growling menacingly, the safari-goers can be heard saying "peeche karo" – asking the driver to reverse the vehicle and move away.

"Tiger growls to mark its presence," wrote Mr Nanda while sharing the video on Twitter two days ago. "Communicating to the world that the area belongs to him. Still the tourists were waiting."

Tiger growls to mark its presence. Communicating to the world that the area belongs to him. Still the tourists were waiting. From a central Indian TR 🙏🏼 pic.twitter.com/m6n6c5xYNd

The video has collected nearly 3,000 views and a ton of responses since being shared online. In the comments section, many criticised the tourists for continuing to talk loudly in the presence of the tiger.

Where was this captured? Priceless video !

In safaris abroad We r asked to keep absolutely quiet when wild animals are spotted .. even in bandipur in view of elephants, we were asked to keep quiet .. what's with the chatter 😱

Nice video, however background score of ppl should stop. I wonder what makes these ppl talk . It's not like everyday we get to see 🐅.

In February, a tiger at the Nandanvan Jungle Safari in Raipur, Chhattisgarh, was filmed chasing a tourist bus. A video of the incident had gone massively viral online, and the bus driver and tour guide were sacked after the incident.