"This Photo Is Real!" Says Justin Bieber. It Is - But There's A Catch

The photograph was created using a technique called forced perception 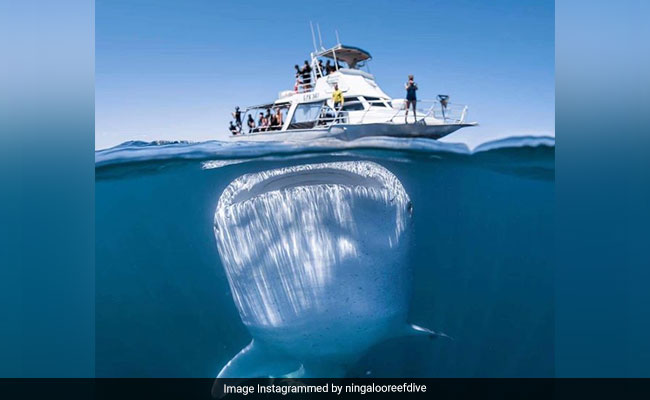 A huge whale shark dwarfs a boat in this striking photograph.

This morning, popstar Justin Bieber took to Instagram to share an incredible photograph of a whale shark swimming under a boat. In the picture, the enormous whale shark - the world's largest species of fish - dwarfs the boat as it appears to swim just under the surface of water and below the vessel. The people in the picture appear miniscule in comparison to the huge fish, which looks like it is about to swallow the boat whole.

"This photo is real!" wrote Justin Bieber of the extraordinary shot. "WHALE SHARK biggest fish in the ocean."

This photo is real! WHALE SHARK biggest fish in the ocean

While Justin is right on both counts - the photo is real and the whale shark is the biggest fish in the ocean - there's still a catch to the whole thing.

According to Daily Mail, the picture was clicked in 2018 by Tom Cannon in the crystal clear water of Ningaloo Reef off the coast of Australia. However, Insider reports that it was created using a technique called forced perception. It is, in fact, a sort of optical illusion.

Forced perspective is a photography technique which employs optical illusion to make objects appear larger, smaller, closer or further away than they actually are. Photos of tourists 'holding' the Taj Mahal or the Leaning Tower of Pisa are examples of forced perspective photography.

Mr Cannon used the technique to make it appear that the whale shark was actually right underneath the boat, while it was actually a short distance away.

"When I took the photo the whale shark was literally centimeters from my camera," Mr Cannon confirmed to Insider. "The boat stayed several meters away to avoid any risk to the shark itself."

Whale sharks can grow up to as much as 60 feet. They are sometimes called gentle giants of the sea, as they are slow-moving filter feeders who appear much more intimidating than they actually are.