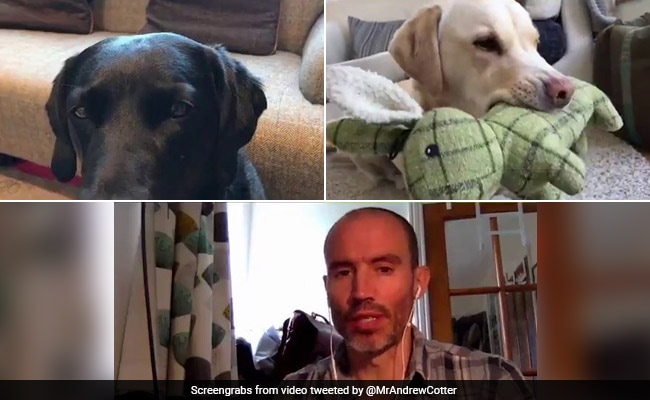 Andrew Cotter in a meeting with his two dogs, Mabel and Olive.

During the coronavirus lockdown, Scottish sports broadcaster Andrew Cotter has been entertaining his followers with the adventures of his pet dogs, Olive and Mabel. But it's not all fun and games in the Cotter household - there's a business to be run and numbers to go over. That's why the BBC commentator decided to sit down with his two pets for a "company meeting". Unfortunately, it wasn't a smooth one - as a video he shared on Twitter shows.

In the clip, Mr Cotter can be seen holding a Zoom meeting with Olive and Mabel. The two dogs, unfortunately, seem least interested in talking business, preferring to spend their time scratching themselves and staring off into the distance.

After the initial teething troubles of turning on audio and video that are common to every Zoom meeting, Mr Cotter attempts to begin the discussion. However, Mabel soon loses interest and starts staring into space.

"This is one of the things that we have to address, the lack of focus at times," says Mr Cotter as Mabel continues displaying zero interest. He then goes on to discuss the "annual report" and says, "You've pretty much ruined the sofas. 913 squirrels chased, none caught, so not a good return, so again things to look at."

How do Mabel and Olive react to that? Watch the hilarious video to find out:

Since being posted yesterday, the video has collected 3.9 million views and more than 1.5 lakh 'likes'. It left thousands of viewers amused, as evidenced by the reactions the clip has collected.

Mabel has been there, done that, and seen more fancy new managers come and go than you could shake a lovely big stick at.

You can't blame her for being disenfranchised.

I feel Kevin the doberman from accounts needs to be performance managed! ????????

Going back to commentary after this is going to be a waste.

This is not the first time that videos of Olive and Mabel have delighted social media users. In April, a video of the two 'playing' had left millions in stitches. The video has collected over 19 million views on the microblogging platform.

Some sports are slower. More about the strategy. pic.twitter.com/JMBaGJ1tSd

What do you think of Olive and Mabel's business meeting? Let us know using the comments section.