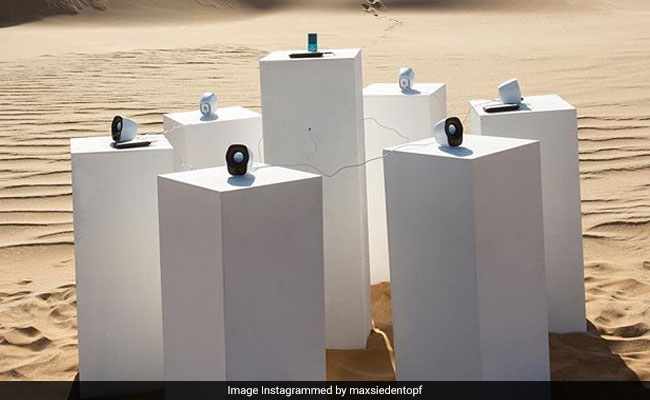 A picture of the installation, shared by Max Siedentopf on Instagram.

Toto's Africa will play on loop in a Namibian desert for eternity after German-Namibian artist Max Siedentopf set up a sound installation, called "Toto Forever" in an undisclosed location in the 1,200 mile-long Namib Desert.

Set on the west coast of southern Africa, Namib is around 55 million years old -- making it the world's oldest desert and the "perfect spot" for his work, Siedentopf, 27, told CNN in an email.

"Hopefully the song will play just as long," he added.

Solar batteries are powering the entire installation, which consists of plinths supporting six speakers attached to a single MP3 player that contains one track: Toto's Africa, the artist explained.

Sound Installation in Africa Plays Toto's Africa Forever Set in the Namib desert, which is not only the oldest desert in Africa but the world, I set up a sound installation which pays tribute to probably the most popular song of the last four decades: Toto - Africa The sound installation consists of 6 speakers which are attached to an MP3 player that only has one song on it - Toto's Africa. The song is put on loop and the installation runs on solar batteries to keep Toto going for all eternity.

The song has been a pop-culture phenomenon since its release in 1982, topping the US Billboard chart and selling more than four million copies in the US alone.

"Even though Africa by Toto was released 1982 it is still very much present in today's pop culture and frequently used for memes and even entire Reddit pages are dedicated to the song," Siedentopf, who is based in London, said.