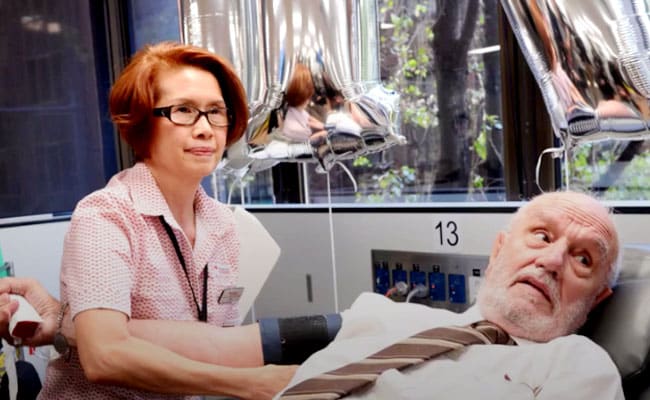 James Harrison's blood donations have saved the lives of more than 2.4 million babies.

James Harrison has donated blood nearly every week for 60 years. The "Man With the Golden Arm," as he is known, has helped save the lives of more than 2.4 million Australian babies.

CNN reports that Mr Harrison's blood has unique, disease-fighting antibodies that have been used to develop an injection called Anti-D, which helps fight against Rhesus disease.

According to UK's National Health Service, Rhesus disease is a condition where antibodies in a pregnant woman's blood destroy her baby's blood cells. This condition can result is brain damage or even death for the babies.

To develop injections that fight against the disease, doctors take Mr Harrison's plasma and return red blood cells back to his body. This is how he has been able to donate so often.

"Every bag of blood is precious, but James' blood is particularly extraordinary," said Jemma Falkenmire, of the Australian Red Cross Blood Service to CNN. "His blood is actually used to make a life-saving medication, given to moms whose blood is at risk of attacking their unborn babies.

"Every batch of Anti-D that has ever been made in Australia has come from James' blood. And more than 17% of women in Australia are at risk, so James has helped save a lot of lives."