This Feathery Dinosaur Probably Flew, But Not Like Any Bird You Know

Not everything that looks like a bird was a bird, especially in the Jurassic period. 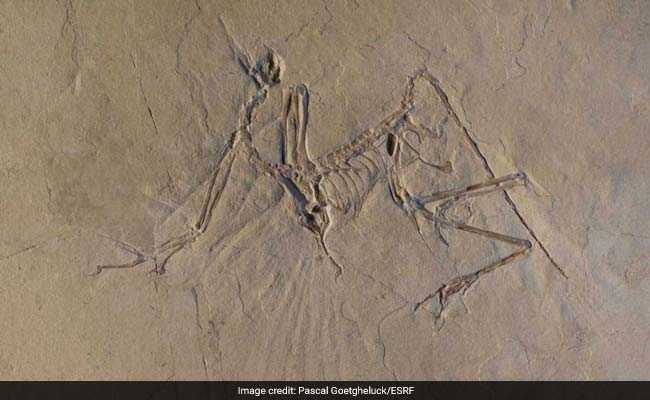 With this Archaeopteryx specimen, imprints from plumage can be seen near the shoulder and the tail's tip

In 1861, German paleontologist Christian Erich Hermann von Meyer wrote a short paper about a fossil so unusual he first thought it was a fake. What appeared to be a bird feather was pressed into 150-million-year-old limestone. Von Meyer labeled it Archaeopteryx, meaning old wing, and a full skeleton was found shortly thereafter.

The bones, discovered two years after Charles Darwin published his "On the Origin of Species," revealed a path to modern birds from their prehistoric ancestors. This discovery was a hint of a revelation to come much later: Birds are living dinosaurs.

During the next 150-plus years, paleontologists discovered 10 more Archaeopteryx skeletons. A picture of the creature emerged, of a dinosaur the size of a crow, weighing little more than a pound and covered in plumage. But feathers, as the penguin and ostrich know, do not necessarily mean flight.

A new report in Nature Communications suggests that Archaeopteryx probably flapped through the air. The dinosaur did so unlike any bird flying today. Archaeopteryx used more shoulder action, the authors of the new report say: Imagine something like a butterfly stroke, according to Dennis Voeten, a researcher at the European Synchrotron Radiation Facility in France and the study's lead author.

Not everything that looks like a bird was a bird, especially in the Jurassic period. Recent discoveries have pushed Archaeopteryx away from its perch as a transitional dinosaur-to-bird fossil - there is now a crowd of finely feathered dinosaurs. Archaeopteryx was probably not, Voeten said, a direct tie to sparrows and ostriches but a member of an offshoot lineage.

As scientists have probed Archaeopteryx's family tree, they also questioned its ability to fly. In the second half of the last century, two positions emerged. One camp said, yes, Archaeopteryx flapped its way off the ground. The other camp said, no, Archaeopteryx scrabbled up trees using its clawed wings, then let go and sailed to the ground like a sugar glider. And a few paleontologists suggested other ideas: Perhaps Archaeopteryx was in the process of losing its flight ability, not gaining it.

In the new study, Voeten and his colleagues probed Archaeopteryx fossils using a synchrotron - a powerful source of radiation. The concept is similar to an X-ray, but your dentist's X-ray machine would fail to distinguish fossilized skeletons from the background rock. A synchrotron beam is much more sensitive.

Bones, Voeten pointed out, record our daily stress. "The right upper arm bone of a professional tennis player is thicker than the left upper arm bone," he said. Likewise, the stress of flying reshapes the wing bones in modern birds. He decided to look for similar evidence in Archaeopteryx.

The study authors examined cross-sections of the Archaeopteryx bones and compared these structures to bones in flying birds, flightless birds, other dinosaurs and modern crocodilians. The Archaeopteryx bone characteristics closely resembled what Voeten called "burst fliers." These are birds like pheasants, roadrunners and turkeys - animals comfortable on the ground but capable of taking flight with a snap of the wings. The study moves Archaeopteryx from a potential flying animal to a probable one, he concluded.

Still, it did not fly like a pheasant. "The modern bird has a very nifty pulley system," Voeten said. The muscle groups that move bird wings up and down are attached at the sternum, like the wheel of a pulley. But if you flap your arms to mimic a bird, you use muscles that are anchored at the chest and shoulders. Archaeopteryx wings were attached like our arms, with no chest pulley. "We're sure that it's incapable of flying like a modern bird does," he said.

Promoted
Listen to the latest songs, only on JioSaavn.com
Voeten expects that the new study will attract Archaeopteryx flight critics and says, "I warmly welcome them." He is not beholden to the idea Archaeopteryx could fly, he said. "This is a very famous, notorious debate that I am entering in as a new guy."