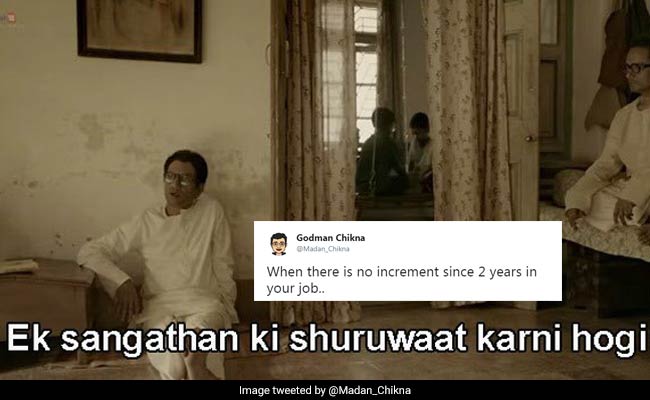 This dialogue from the movie 'Thackeray' has become a meme on social media.

The much-anticipated trailer of Thackeray was released yesterday and trended through the evening. The trailer of the Nawazuddin-starrer biopic on Shiv Sena founder Balasaheb Thackeray managed to impress viewers, who took to social media in huge numbers to praise it. However, amidst the flood of 'superb' and 'gripping', we sought out what has now become a regular feature of Twitter - memes! As is often the case with Bollywood movies, with Thackeray too, a dialogue from the trailer was turned into a hilarious meme by tweeple.

The dialogue: "Ek sangathan ki shuruwaat karni hogi (Have to start a union)" has become a hugely popular meme on the micro blogging website. We compiled some of the best examples for you. Take a look:

When there is no increment since 2 years in your job.. pic.twitter.com/LYCuQh3wc3

#ThackerayTrailer#Thackeray
When my friend got beaten up by his crush's dad pic.twitter.com/wfx6EKU87V

Every Indian uncle, while making a Family Whatsapp Group. #Thackeraypic.twitter.com/VIzBQmKYw8

Ross and will when they both hate Rachel #Thackeraypic.twitter.com/DOT9vCiGrH

This is not the first time that a dialogue from a movie has been given the meme treatment by Twitter. In the past, this has happened with Daisy Shah's famous "our business" dialogue from Race 3, as well as to scenes from Sanju and Newton.