This Desi "Jugaad" To Keep Locusts Away Is Massively Viral. Watch 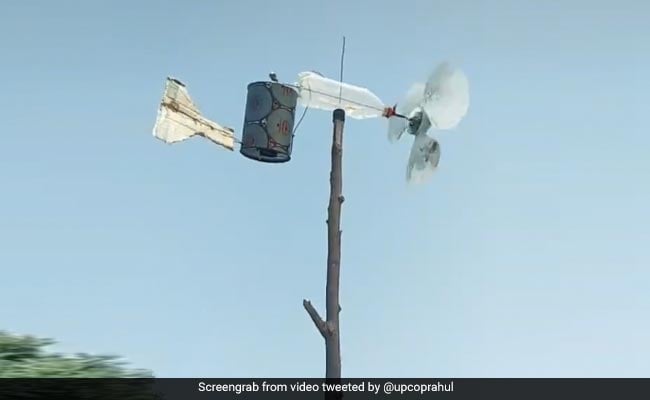 An innovative hack to keep locusts away is going viral on social media.

As crop-damaging locusts swarm northern India, authorities have been advising farmers on ways to safeguard their crops from the insects. Farmers have been asked to create a racket using drums, utensils and even mobile disc jockeys to to prevent attacks by locust swarms, known to devour everything in their path. A video showing a farmer's jugaad or creative hack to keep locusts away is now going massively viral on social media.

Rahul Srivastav, a superintendent of police in in Uttar Pradesh's Jhansi district, took to Twitter this morning to share a video of the jugaad that has already collected a whopping 26 million views on TikTok. Jugaad is a Hindi word used to signify creativity in making the best out of scanty resources and is celebrated as an example of the Indian spirit of resourcefulness and enterprise.

Mr Srivastava praised the invention shown in the TikTok video while sharing it on the microblogging platform and wrote: "Locust is the mother of inventions". He also added the hashtags #Jugad and #JugadRocks, among others.

The invention shows an 'airplane' mounted on a long pole in the middle of a field. The 'airplane', created out of moving fan blades, a plastic bottle, a can and a cardboard tail, is seen rotating atop the pole and making a loud noise that would keep the locusts away. Take a look:

The hack to prevent locust attacks has garnered a lot of praise on Twitter.

Innovation at its best! Apparently the loud noise keeps the locust away https://t.co/cCzq4NiUli

On TikTok, the video has gone viral with nearly 27 million views and 1.5 million 'likes'.

Mr Srivastav had earlier shared a video a 'DJ vehicle' playing loud music in a field in Uttar Pradesh to scare locusts. "DJ's (disc jockeys) are not only for singing and dancing... they are also effective in scaring away armies of locusts. Everyone sees a new morning... You can also bang utensils or make noise to scare them away," he wrote while sharing the video.

The Union Agriculture Ministry announced last month that 15 sprayers would be procured from the UK to control the spread of locust swarms. The desert locust is a species of locust, a swarming short-horned grasshopper. Though they don't attack animals or humans, they can devastate crops, posing a risk to the livelihood of millions.