Locusts attack: At some places in UP, farmers have been advised to beat "thalis" to drive these insects away. 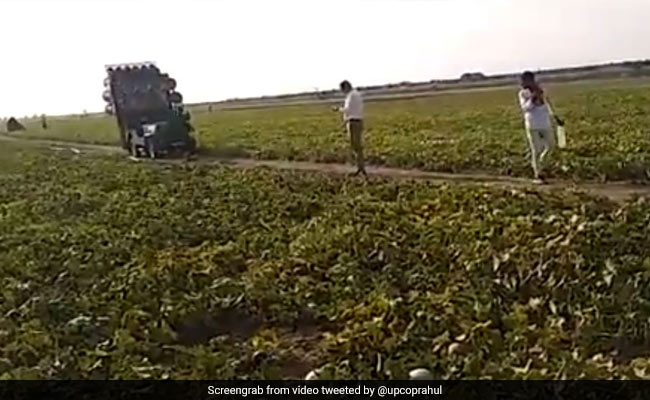 Locusts attack in UP: The video was tweeted by a senior UP cop.

As 10 districts in Uttar Pradesh stay on alert after swarms of locusts were spotted in Mahoba and Jhansi, a video shared by a senior police officer shows the different strategies being adopted by farmers to protect their fields from the short-horned grasshoppers.

The locusts have entered the state after attacking crops in neighbouring Rajasthan and Madhya Pradesh, officials have said.

In the nearly 30-second clip, posted by a UP police officer posted in Jhansi, Rahul Shrivastava, a vehicle fitted with loudspeakers - locally known as a ‘DJ vehicle' used for music in marriage processions - can be seen as loud music plays from the speakers

"DJ's  (disc jockeys) are not only for singing and dancing... they are also effective in scaring away armies of locusts. Everyone sees a new morning... You can also bang utensils or make noise to scare them away," the tweet posted in Hindi reads.

Locusts entered Rajasthan from Pakistan earlier this month, and then drifted into other parts of western India. Desert locusts are often spotted in the country, but on a very small scale, a Union Environment Ministry official told PTI

"This attack is huge. It is a once in a three-decade situation and timed very badly for us as we are already dealing with coronavirus," Soumitra Dasgupta, Inspector General, Wildlife told PTI.

"Local officials have been put on alert and asked to remain prepared with chemicals in tractor-mounted sprayers, power sprayers and fire brigade," an Uttar Pradesh government spokesman said.

In Jhansi, locusts have been spotted over the last couple of days and farmers told that they should alert a control room whenever they see a swarm.

In Mahoba district, there are reports of partial damage to vegetables over 25 hectares and a detailed assessment of the loss is being done, the spokesman said.

In Rajasthan, pesticide was sprayed on locust swarms at two places in Dausa district on Monday night.

Some swarms then moved towards Karauli and other nearby areas on Tuesday, Rajasthan Agriculture commissioner Om Prakash said.

He said Jaipur and Dausa have now been cleared of locusts.

The locust activity in Rajasthan's Karauli triggered an alert in Jhansi, Lalitpur, Jalaun and Auraiya in UP as well as in districts like Hamirpur, Kannauj, Etawah and Kanpur Dehat which adjoin them.

"This is an emergency, and we need to remain vigilant. This swarm has come travelling through Iran, Pakistan, Rajasthan and Madhya Pradesh. Two days ago, a large number of locusts were killed following spraying of chemicals," he said.

At some places in UP, farmers have been advised to beat "thalis" to drive these insects away.

In Mr Vamsi's district, authorities were arranging sound systems in the fields where crops could be attacked.

"Farmers have been advised to play loud music to drive the insects away and save crops like moong and vegetables," the official said.

Locusts don't attack animals or humans, but can devastate crops and other areas of greenery.

Mr Vamsi said a seven-member team from the Centre has been touring Uttar Pradesh and Madhya Pradesh, dealing with the problem.