This Baby Elephant Found A Friend In A Dog. Watch Their Adorable Video

"Friends come in all sizes and shapes..." 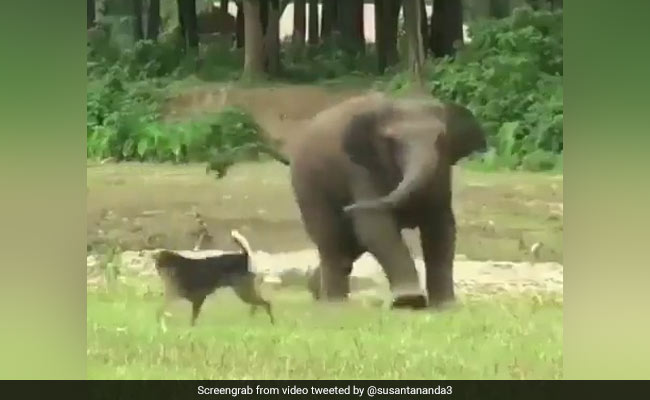 Yindee the elephant plays with Milo the dog.

Everyone needs a friend. This baby elephant found one in a dog - and their adorable video is winning hearts online. The old video shows Yindee the baby elephant playing with a dog named Milo at Thailand's Elephant Nature Park - and it is the perfect dose of wholesomeness to bring in the weekend. Although it was filmed in 2015, the video is going viral again after being re-posted on Twitter by Indian Forest Services officer Susanta Nanda on Thursday.

"Friends come in all size and shapes..." he wrote while sharing the clip which shows the playful elephant chasing the dog. According to One Green Planet, the video marks the first time that Yindee, a rescue elephant, met a dog. Instead of hesitating, he began playing with the canine right away. Watch their adorable video below:

Friends come in all size and shapes... pic.twitter.com/PaDOQzG6c4

Since being posted on Twitter, the video has been viewed over 11,000 times, collecting a ton of amused reactions.

Yindee was born at the Park in 2013 to Mintra - a former street begging elephant who was hit by a car when she was just four years old. Growing up at the sanctuary, Yindee met Milo - a dog who belongs to one of the mahouts. According to the Elephant Nature Park, Milo loves to play with elephant and often tries to get the jumbo to run with him.