Things you didn't know about reindeer 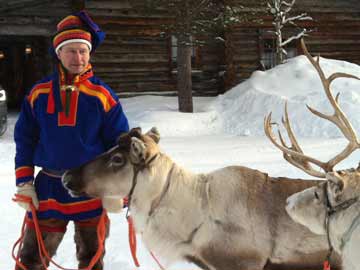 In this March 2013 photo, A Sami handler in traditional clothing holds two of his herd in Saariselka, Finnish Lapland.

Helsinki: Reindeer are featured on Christmas cards and in movies worldwide this time of year, galloping across the sky with Santa's sleigh in tow.

But on Europe's northern fringe, the migratory mammals are part of everyday life all year round as they roam the fells of Lapland - the Arctic homeland of the indigenous Sami people of Norway, Sweden, Finland and northwest Russia.

Here are some interesting things you may not have known about reindeer:

Of course reindeer can't fly but they can run quickly over long distances.

"Reindeer are fast, but not as fast as horses," says Jonas Vannar, a Sami reindeer herder from Jokkmokk in Swedish Lapland. "They can easily travel 40 to 50 kilometers (24 to 31 miles) a day if they have to."

The migratory animals can roam 125 miles (200 kilometers) or more in the spring from their winter grazing grounds in the forests to reach calving grounds high in the mountains.

"On hot summer days, they migrate vertically ... until they reach snow patches where the temperature is lower, then back to the valleys, to graze during the midnight sun," says Vannar.

"The hair of the reindeer is hollow, so there is air between the hairs and also inside the hair, and their winter coat is really thick," Heikkila says.

That makes them super-insulated, one reason why Samis have always made their winter clothes from reindeer hides.

Reindeer also have large hooves compared to moose or deer. When the snow is deep, they spread their hooves and make them even wider to stop themselves from sinking in.

Reindeer eyes change colour between summer and winter to adapt to the widely varying levels of light in the high north.

"The reflection from reindeer eyes is yellow-green in summer ... but deep blue in winter," says Karl-Arne Stokkan, a professor at the University of Tromsoe in Norway, part of a scientific team that discovered earlier this year why that is.

Due to the extremely limited light in the far northern winter, reindeer's eyes need to be much more sensitive to light then than in summer. The blue colour during the darkest months of the year helps scatter more incoming light and results in better vision, says Stokkan.

Reindeer meat is a popular staple across Lapland. In Finland, demand for the gamey, low-fat meat outstrips the supply, so it has to import reindeer meat from Russia.

A reindeer cooking competition is held in the northern Finnish town of Inari each year, where Sami chefs pit their traditional recipes against modern culinary arts.

Traditionally, Finnish Sami have used all parts of the reindeer, making dishes such as reindeer sausage or stuffed reindeer stomach. A more common dish is sauteed reindeer with mashed potatoes and lingonberry jam.

At the Kaunispaan Huippu restaurant in the northern Finnish town of Saariselka, the menu features such delicacies as smoked reindeer mousse with blackcurrant sauce and reindeer with Lappish cheese.

"Our special way to cook reindeer meat is to hot-smoke the roast on an open fire," says chef Jorma Lehtinen, who then fries the meat in rosemary butter.

Reindeers are slaughtered in late autumn or early winter but their meat can be frozen and used throughout the year.

Who really saw them fly?

In popular culture, eight flying reindeer pull Santa's sleigh as he delivers presents to children around the world on Christmas Eve. That scenario was first described in the 1820s by American poet Clement Clarke Moore. More than 100 years later, American writer Robert L. May added Rudolph with his red nose leading the way.

Some of the story is rooted in reality, as migrating reindeer herds are usually led by a single animal.

But there's debate on the origins of the flying reindeer, and some have traced it to reindeer eating hallucinogenic mushrooms. Ancient Sami shamans, the theory goes, would then drink filtered reindeer urine and get high themselves, then think they were seeing their reindeer "flying."

"Mushrooms have been used to a certain extent in shamanic ceremonies," says Arja Jomppanen, a researcher at Sida, the National Museum of the Finnish Sami in Inari. "But drinking urine has not been mentioned in accounts of Sami traditions."

Hakan Rydving, an expert in Sami religion at Norway's University of Bergen, firmly rejected the
theory as a myth.

"There is no such information at all from the Sami world, neither about drinking the urine of reindeer, nor of seeing flying reindeer in their dreams," he said.

But they must pause to pee

Promoted
Listen to the latest songs, only on JioSaavn.com
Reindeer can't walk too far without answering the call of nature. In fact, they are unable to walk and pee at the same time, so they have to take a bathroom break roughly every 6 miles.

In Finnish, this distance is known as "poronkusema" or "reindeer's piss" and was an old-fashioned description of distances in the countryside.
Comments
ReindeerChristmas