These Unpopular Opinions On Desi Food Are Dividing Twitter

These opinions on everything from biryani to jalebi are dividing Twitter 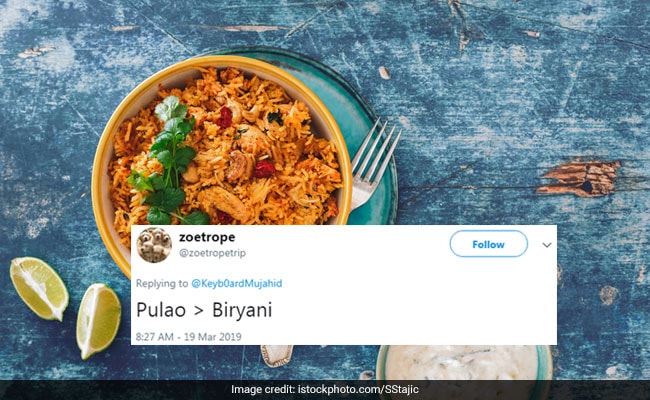 "Biryani is overrated," wrote one person on Twitter as part of the 'unpopular opinion' meme.

As people tweeted on everything from jalebi to biryani to dosa, others sought to change their opinions.

The tweet soon led to a barrage of opinions flooding Twitter. Take a look at some of them below:

Some people professed their dislike for mithai

mithai is too sweet https://t.co/4kYLoUw3wZ

Mithai is way too sweet for anyone to consume

One person chose pulao over biryani

And others began to brand biryani as overrated

Calicut Biryani trumps literally every other biryani in the world.

It's fine to disagree with me but know that you are wrong.

"North Indian food as a whole is overrated," stated one Twitter user

North Indian food as a whole is overrated.
Gives nothing but acidity.
Masala in everything starting from breakfast.

And soon others started sharing their take on Indian food

food in the north, south and east is so diverse and delicious while the food in western india tastes like you made some khichdi out of random ingredients lying in the house https://t.co/sJS9bfpVPu

South Indian food is just loads of starch/sugar and white stuff that just so bland that it wouldn't have it even exist ed had it not been for the chutneys/sambhar/rasam.

The humble raita also elicited a ton of responses

Pineapple Raita is not a side dish. Its dessert. https://t.co/lntcXBPH5o

And so did a lot of other fruits, vegetables, dishes and regional cuisines

Tbh butter chicken is the most overrated desi food.

Our Desi food is most unbalanced diet. No nutrients just calories. https://t.co/ShLYAqcfqg

Which of these unpopular opinions do you actually agree with? Let us know using the comments section below.